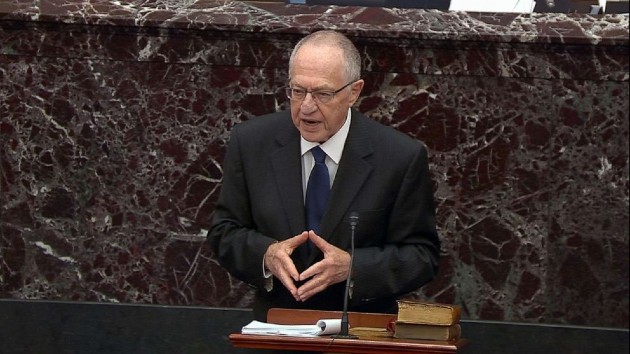 Alan Dershowitz speaks on the Senate floor on Jan. 27, 2020. (ABC News)(WASHINGTON) — The impeachment trial spilled into its second week on Monday, as President Donald Trump’s counsel presented more opening arguments on the Senate floor.It was the first day back following The New York Times’ bombshell report on Sunday that Trump’s former national security adviser, John Bolton, had detailed in an unpublished manuscript a conversation where the president reportedly tied the release of Ukraine military aid to investigations into the Bidens.ABC News has not independently reviewed the manuscript, but according to the Times, Bolton wrote that he had a conversation with Trump about the Ukraine aid and investigating his political rivals in August 2019.The news put more pressure on the question of whether or not there will be witnesses during the impeachment trial.Here are three things to know from Monday:Impact of Bolton’s reported conversation with TrumpBolton’s unpublished manuscript, which reportedly contradicts Trump’s defense about the withholding of military aid, created a firestorm in Washington and put increased pressure on Republicans to make way for witnesses at the Senate trial.Some Republicans on Monday indicated they’d support hearing from Bolton, like Utah Sen. Mitt Romney.”It’s pretty fair to say that John Bolton has a relevant testimony to provide to those of us who are sitting in impartial justice,” Romney said.Similarly, Sen. Susan Collins of Maine said in a statement: “The reports about John Bolton’s book strengthen the case for witnesses and have prompted a number of conversations among my colleagues.”Although there appeared to be a shift toward the possibility of allowing witnesses among Republicans on Monday, South Carolina Sen. Lindsey Graham said if they were going to add Bolton, “then we’re going to go to Hunter Biden, Joe Biden and all these people.””If there’s a need to add to the record, then my view is that we’re going to completely add to the record, not selectively, and I’ll let you know Thursday if I think there’s a need,” Graham said.”If the Senate needs to secure testimony from John Bolton, then I will say so. If I think that’s necessary for fairness, but I also have said for weeks that if we call one witness we’re gone call witnesses requested by the president,” he continued.Jay Sekulow, the president’s personal lawyer, said during opening statements that the defense team planned Monday to continue using the same “pattern” that they used when dealing with the case on Saturday, and did not mention Bolton.”We deal with transcript evidence,” Sekulow said. “We deal with publicly available information. We do not deal with speculation — allegations that are not based on evidentiary standards at all.”Trump’s lawyer, Alan Dershowitz, argued Monday evening that even if Bolton’s revelations are proven true, they are not an impeachable offense.”Nothing in the Bolton revelations, even if true, would rise to the level of an abuse of power or an impeachable offense that is clear from the history that is clear from the language of the Constitution,” Dershowitz said. “You cannot turn conduct that is not impeachable into impeachable conduct simply by using words like quid pro quo and personal benefit.”Trump’s team takes aim at BidenTrump’s defense team went after Joe Biden’s son, Hunter, on Monday, going through the numerous questions that surround his time serving on the board of a Ukrainian gas company.Pam Bondi spent a significant amount of time on the Senate floor addressing the rumors floating around regarding the Bidens, despite telling the Senate, “We would prefer not to be talking about this. We would prefer not to be discussing this, but the House Managers have placed this squarely at issue, so we must address it.”Bondi questioned Hunter Biden’s qualifications to hold the position, and his salary while serving on the board.She also discussed when Joe Biden disavowed the former Ukrainian prosecutor general during his time as vice president, alleging that Biden wanted the official out because he was investigating the company where Hunter Biden served on the board.However, there was widespread criticism of the Ukrainian prosecutor general at the time, including from European governments, and Biden was implementing U.S. policy.Trump and fellow Republicans have appeared to attempt to shift the narrative of impeachment away from the president and onto the Bidens since the impeachment inquiry was first launched last year.Abuse of powerDershowitz, the former Harvard Law School professor who is playing a role on Trump’s defense team, argued that a sitting president cannot be impeached for abuse of power on Monday, saying, “Even if criminal conduct were not required, the framers of our Constitution would have implicitly rejected, and if it had been presented to them, explicitly rejected such vague terms as abuse of power and obstruction of Congress as among the enumerated and defining criteria for impeaching a president.”The concept of “abuse of power” was raised at several points during Monday’s opening arguments, including a direct response to Democrats’ arguments from last week.Trump team lawyer Eric Hershmann said, “If Manager Jeffries’ standard applies, then where were these same Democrats’ calls for impeachment when uncontroverted ‘smoking gun’ evidence emerged that President Obama had violated their standard?””The American people understand this basic notion as equal justice under the law. It’s as American as apple pie,” he said. Copyright © 2020, ABC Audio. All rights reserved.