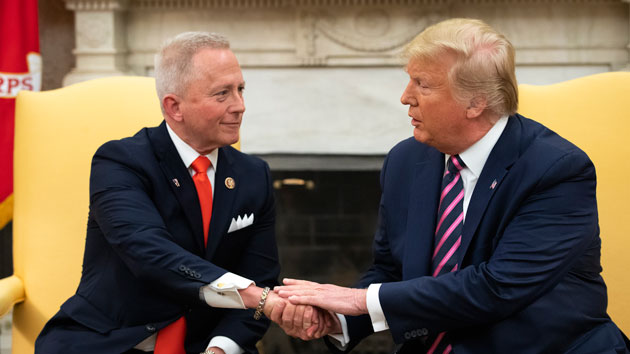 Drew Angerer/Getty Images(WILDWOOD, N.J.) — Amid the ongoing impeachment trial in the Senate, President Donald Trump will leave Washington and head to the Democratic stronghold of New Jersey to rally for a congressman who refused to vote for impeachment as a Democrat and then switched parties.Trump’s rally in Wildwood, N.J. Tuesday night takes place in newly-minted Republican Rep. Jeff Van Drew’s district, who, after switching parties, declared his “undying support” for the president.And while the rally at Wildwoods Convention Center is in Democratic stronghold of New Jersey, Trump supporters have lined up around the block more than 24 hours before the president is scheduled to speak— a not so uncommon occurrence at the president’s campaign rallies.The Wildwood rally serves multiple purposes for the president. Trump will look to tie Van Drew’s Democratic exodus to a larger argument against the party’s impeachment push. Van Drew, who will travel with the president on Air Force One to the event, bucked his own party by voting against impeachment in the House. On Tuesday night, the president will tout that move to his constituents.Tuesday night will also be Trump’s latest attempt to counter the ongoing impeachment trial with the packed rally offering the president a bastion of feverish and seemingly undying support from his faithful backers.And while the Trump campaign won’t exactly say New Jersey is in play in 2020, a state that former Secretary of State and Democratic presidential nominee Hillary Clinton won by nearly 15 points in 2016, the president’s team says the turnout for Trump’s first rally in the Garden State should worry Democrats.“If I were a Democrat, I would look at the enthusiasm and crowd here and think what the hell is going on here?” Trump campaign communications director Tim Murtaugh told ABC News in an interview.Trump will head to Iowa on Thursday for his second rally this week when he looks to counter Democrats ahead of the caucuses next week. The campaign plans to deploy over 80 surrogates across Iowa on caucus day, including Donald Trump Jr., Eric Trump, Lara Trump along with Cabinet-level officials like White House Chief of Staff Mick Mulvaney. Copyright © 2020, ABC Audio. All rights reserved.