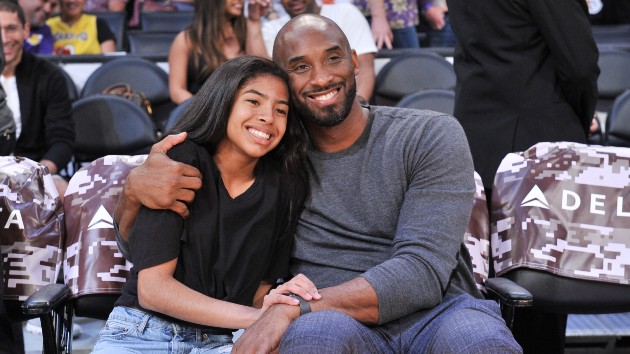 Allen Berezovsky/Getty Images(HARTFORD, Conn.) — The University of Connecticut women’s basketball team paid tribute Monday to Gianna Bryant, the 13-year-old daughter of NBA legend Kobe Bryant who was following in her dad’s footsteps as a basketball star.The Huskies placed a No. 2 UConn jersey with flowers on their bench at Monday’s game in Hartford against USA Basketball.The team shared a photo of the tribute on social media, writing, “Mambacita is forever a Husky.”

Mambacita is forever a Husky ? pic.twitter.com/3wdAbdK0Ye

Gianna, known as Gigi, earned the nickname “Mambacita” because of her tenacity on the basketball court, like her famous dad, Bryant, whose nickname was “Mamba.”The father and daughter were on their way to a basketball game at Bryant’s Mamba Sports Academy in Thousand Oaks, California, Sunday morning when their helicopter crashed on a hillside in Calabasas. The Bryants, six other passengers and the helicopter pilot were all killed in the crash.Bryant started coaching Gianna’s basketball team when he retired in 2016, ending his 20-year career with the Los Angeles Lakers.Gianna reportedly wanted to attend the University of Connecticut and even got a chance to meet with the school’s women’s basketball team when they made a visit to Los Angeles in 2017. UConn women’s basketball coach Geno Auriemma also said Gianna visited the campus in Connecticut, according to ESPN.The UConn team and Team USA also observed a 24-second moment of silence at Monday night’s game, in honor of Bryant’s No. 24. At the start of the game, Team USA held the ball for an eight-second backcourt violation in honor of Bryant’s first jersey number, No. 8.The Huskies later ran out the 24-second shot clock as a tribute to Bryant’s second NBA jersey number, according to ESPN.In addition to coaching Gianna’s girls’ basketball team, Bryant was known as an outspoken supporter of the WNBA and female basketball players.Just a few days before his death, Bryant said he could see a day where women could play in the NBA, the same league he dominated for 20 years.”There’s a lot of players with a lot of skill that could do it,” he told CNN last Wednesday. “Diana Taurasi, Maya Moore, Elena Delle Donne. There’s a lot of great players out there, so they could certainly keep up with them.”Bryant was also actively involved with the WNBA through his close friend and former teammate Derek Fisher, who is now the head coach for the Los Angeles Sparks.”I want us to continue to push for what he was most recently striving for in terms of equity and opportunity for young girls, for girls like his daughters that are still with us,” Fisher told ABC News’ Good Morning America Monday. Copyright © 2020, ABC Audio. All rights reserved.