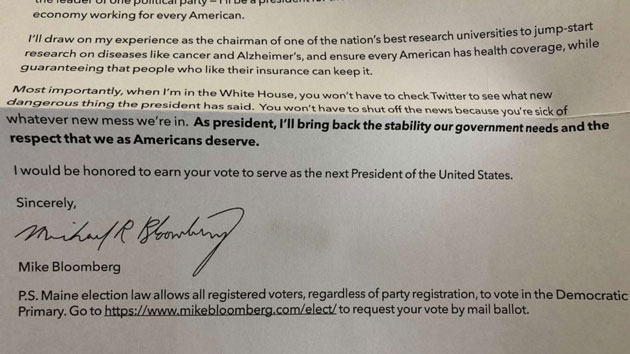 Maine Secretary of State’s Office(NEW YORK) — Mike Bloomberg’s campaign has engaged in aggressive outreach to Super Tuesday voters, sending out paper letters detailing the former New York City mayor’s long record of experience, and a broad outline of things he’d get done as president.But one postscript at the bottom of a recent mailer offered inaccurate voting information to residents in Maine.It reads, “P.S. Maine election law allows all registered voters, regardless of party registration, to vote in the Democratic Primary. Go to https://www.mikebloomberg.com/elect/ to request your vote by mail ballot.”However, the Maine Democratic primary on March 3 is actually closed, meaning only voters who are registered Democrats can vote in that primary. If you are a registered Republican or registered Independent, you cannot vote in the Democratic primary. The Republican primary is being held the same day, though Donald Trump is the only one on the ballot.The error was flagged by a Maine voter who received the mailer, and then alerted Secretary of State Matthew Dunlap’s office late Tuesday, according to Dunlap Communications Director Kristen Muszynski.Dunlap’s office sent out a statement issuing a correction to the Bloomberg campaign, saying that Dunlap was “reaching out to voters who may have received a political mailing with inaccurate voting information,” calling the Bloomberg campaign by name as the actor.”We received this from a voter who said, ‘I, and I have friends, who got this — and this is concerning,” Muszynski told ABC News in a phone interview. “And we said, ‘Oh, yes it is."”Muszynski said it was probably an “honest mistake” on the Bloomberg campaign’s part.”I know these are national campaigns; you know voting is very different depending on what state you’re in. … It’s complex,” Muszynski said.”We felt very strongly that it was our responsibility to step up and say — this was inaccurate,” she added.A Bloomberg campaign spokesperson told ABC News that the letter was “targeted at Democrats and unaffiliated voters,” and they “regret any confusion,” adding they are sending a “follow-up mailer” to clarify.”Earlier this week, the campaign sent a letter introducing Mike Bloomberg and his record targeted at Democrats and unaffiliated voters in Super Tuesday states,” a Bloomberg campaign spokesperson said in a statement to ABC News. “Due to slight variations in local election laws in Maine, Colorado, and North Carolina that weren’t captured in the letter, the campaign is sending a follow up mailer to recipients in those states clarifying how they can participate in their upcoming Democratic primaries. We regret any confusion this may have caused.”Just days ago Bloomberg paid a visit to Maine — the first by a 2020 presidential candidate — part of his overarching strategy to key in on Super Tuesday states.Maine does have same-day voter registration, so those who are unaffiliated can register at a polling site and then vote. If you are already registered for one party, there is a 15-day waiting period or you can register before the deadline of Presidents Day on Feb. 17.Simple clerical errors seed confusion, and “certainly could” cause frustration that impacts participation at the ballot box, Muszynski said.Muszynski said when they learned of the inaccuracy, they reached out to the campaign via the press email to say they were issuing a correction, but did not speak with them about it.”It’s not our job to do their mailers,” Muszynski said. “Our role is to make sure that Maine voters know what’s accurate and what isn’t. It’s a matter of us getting the right information out and making sure people feel comfortable with their ability to vote.” Copyright © 2020, ABC Audio. All rights reserved.