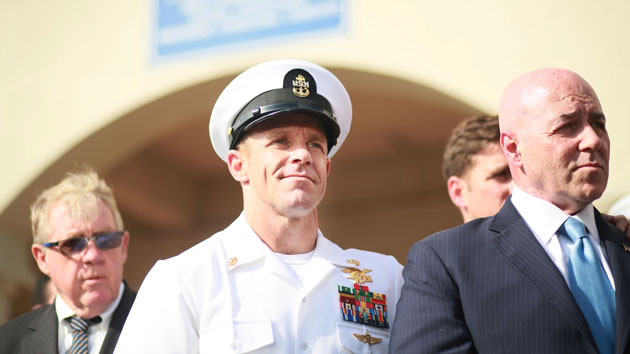 Sandy Huffaker/Getty Images(WASHINGTON) — Retired Navy SEAL Eddie Gallagher is back in the news again after posting a video to his social media accounts where he labeled the SEAL colleagues who stepped forward with allegations about his behavior as “cowards” and also included information about their current military units and employment.Last year, Gallagher was acquitted of war crimes and murder in the death of an Islamic State detainee, but he was convicted of having posed with the detainee’s corpse and was reduced in rank. President Donald Trump later restored his rank and his right to keep wearing the dolphin pin that identifies him as a member of the SEAL community.The investigation into Gallagher’s actions originated with allegations made by members of the SEAL platoon he served with during a 2017 deployment to northern Iraq.The video posted by Gallagher includes video footage, obtained by the New York Times, showing his fellow SEALs being deposed by Naval Criminal Investigative Service (NCIS) investigators.The names and current jobs of the SEALs and an NCIS investigator appear on screen, leading to concerns that posting such information could pose a risk to those serving in classified units or working for security contractors.At the start of his video Gallagher can be heard saying, “the fight to clear my name is not over.””Even though I went to trial and exposed all the lies that were said about me by certain cowards in my platoon and found not guilty, there are those to this day who refuse to accept that fact,” said Gallagher.Tim Parlatore, Gallagher’s attorney could not be reached for comment by ABC News, but he told the San Diego Union-Tribune that the video was part of a larger project. The attorney also told the newspaper that “there’s nothing in that video that’s not already public.”But a Navy spokesperson said the service does not identify its special operators for safety reasons.”As a matter of policy we do not identify our special operators,” said Capt. Tamara Lawrence, a spokesperson for Naval Special Warfare Command. “We don’t identify them by name, or by any other manner, due to the nature of their work, for the protection of their teammates and their families, and to protect on-going and future missions. Our Force knows this is our policy.”Gallagher’s case was among a series of high-profile cases of misconduct in recent years involving members of the U.S. military’s elite special operations forces that raised questions about the ethics and behavior of those units.On Tuesday, U.S. Special Operations Command (SOCOM) released the results of a comprehensive review of the ethics and culture of special operations forces and reported that it did not find “a systemic ethical behavior problem” but concluded that regular deployments have led to lapses in leadership and leadership development.”We did find that certain aspects of our culture have, at times, set conditions favorable for inappropriate behavior. We have a ‘can-do’ culture with a bias toward action. Part of that culture is what makes us great but we can’t be unbalanced,” Gen. Richard Clarke, the head of SOCOM told a small group of reporters.”Nearly 20 years of continuous conflict have imbalanced that culture to favor force employment and mission accomplishment over the routine activities that ensure leadership, accountability and discipline. This is a problem and our review team recommended more than a dozen ways to address it,” he added. Copyright © 2020, ABC Audio. All rights reserved.