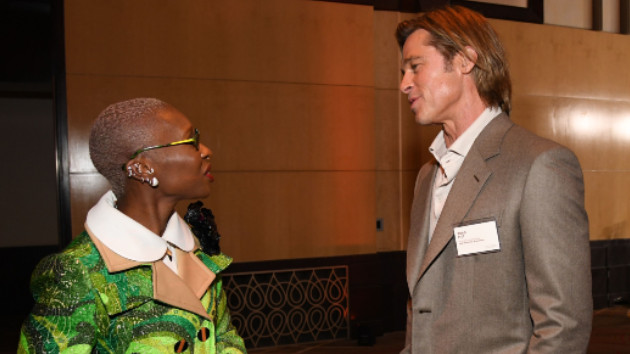 Photo by ROBYN BECK/AFP via Getty Images(LOS ANGELES) — In the past, Brad Pitt has claimed he suffers from prosopagnosia — or an inability to remember faces.

So maybe for the benefit of those similarly afflicted did one of the most famous faces in the world decide to wear a nametag to Wednesday’s annual Oscars luncheon.

Or maybe The Once Upon a Time…in Hollywood nominee was just being a wiseguy, as seems to be his wont lately.

The luncheon is an opportunity for every Academy Award nominee to get together and celebrate before the awards show. Pitt apparently wanted to be sure that anyone who approached him knew who they were talking to: he was photographed wearing a nametag while in conversation with Harriet star Cynthia Erivo.

The tags were apparently given out when guests checked in — but they certainly make more sense for random producers to wear than one of the most recognizable people on the globe.Pitt, 56, has been nominated in the best supporting actor category — and most agree he’s got a really good chance for his first acting Academy Award.Pitt won a Best Picture Oscar in 2012 for producing 12 Years a Slave.The Academy Awards will take place Sunday, Feb. 9 at 8 p.m. The ceremony airs live on ABC.