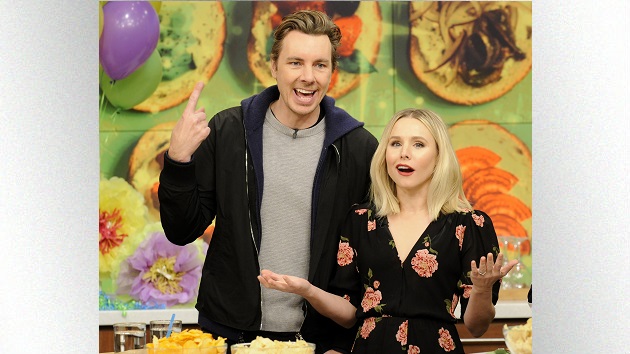 ABC/Jeff Neira(LOS ANGELES) — Turns out, even happy couples argue.  Kristen Bell admits she and husband Dax Shepard have them, but one in particular stands out from the rest.

Appearing on the podcast Life is Short with Justin Long, the Frozen 2 actress first revealed that she and her husband promised that, when asked about their six-year marriage, that they would “show the good, the bad and the ugly and how we handle it. Let’s not make it saccharin.”

So, jumping straight to the ugly part after touching upon that the two go to therapy and argue, The Good Place star gushed to Long, “We had this pretty incredible fight recently. Incredible. I mean like top of the lungs screaming.”

“It was about things around the house that I felt I needed to help with,” Begins Bell, explaining that she asked Shepard to help her with about 10 minutes worth of chores.  “I left this note and then I came home on Sunday… everything was fine.”

The next day, however, Shepard reportedly vented his frustration over the note and that he felt “really controlled” by it.  Bell adorably added that she knows when her husband becomes angry because his nostrils flare.

Turns out, the two “blacked out” and that she doesn’t “actually remember what happened” besides the fact the two were rowdy and shouted unkind things at one another.  Summed up Bell, they were basically letting out everything they had let build up inside them and the dam broke that night.

So, how did they fix it?  Days later, she visited a dog cafe with her kids and showed Shepard an adorable dog she wanted to rescue.  That served not only as an olive branch, but led to little fluffy Frank’s adoption.

To which Bell finds is “so much better than an apology!”

Do they know it’s Christmas? Drew Barrymore reveals she doesn’t give her kids gifts