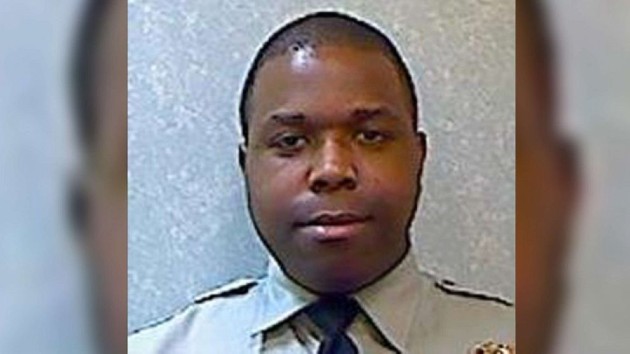 Prince George’s County Police Department via Twitter(TEMPLE HILLS, Md.) — A Maryland police officer was charged with murder on Tuesday after fatally shooting a suspect who was handcuffed at the time, according to police.Prince George’s County Police Department officer Michael Owen Jr. was charged with second-degree murder in the shooting death of 43-year-old William Green while he was cuffed in the front seat of the officer’s cruiser with his hands behind his back, police said.Owen, a 10-year veteran of the force, fired seven shots at the man after arresting him in Temple Hills, about 50 miles southwest of Baltimore, on Monday night. The shooting unfolded as Owen and an unidentified second officer were responding to a call about a man slamming his vehicle into parked cars, police said.

Green, who was suspected to be under the influence of PCP at the time, was removed from this car, handcuffed and placed in the front seat of the police cruiser while Owen and another officer waited for a drug recognition expert, police said.At some point, Owen got into the driver’s seat of the cruiser beside Green. The department said the officer opened fire a “short time later,” but it’s unclear why, according to the department.Owen and the unidentified second officer removed Green from the cruiser and provided aid until medics arrived, police said. He was transported to a local hospital where he died a short time later.”This is the most difficult moment of my tenure as your chief of police,” Hank Stawinski told reporters Tuesday evening. “I’m unable to come to our community this evening and provide you with a reasonable explanation for the events that occurred last night. I have concluded what happened last night is a crime.””There are no circumstances upon which this outcome is acceptable and I want to extend my heartfelt sorrow and sympathies to the Green family,” he added.The department said it is investigating why the officer may have opened fire even though the man was restrained. There was no body camera on during the incident.Family members held a vigil for Green near the scene in Temple Hills on Tuesday.”They shot my son and it’s not right,” Green’s mother, Brenda Green, told Washington, D.C., ABC affiliate WJLA-TV. “How you gonna shoot somebody sitting in a front seat of a car in handcuffs and with a seat belt on? Why would you do that?”Green’s fiancee, Sandra Mathis, said the family is determined to “get to the bottom” of what happened.”We want to know why our loved one was brutally shot in a police car, handcuffed, seat-belted and in the front seat,” Mathis told WJLA. “We have questions that’s not being answered. We want to get to the bottom of this.”Owen was charged with second-degree murder, voluntary and involuntary manslaughter, first-degree assault and use of a firearm in the commission of a crime of violence.He was still in police custody as of late Tuesday. It’s unclear if he has retained an attorney.