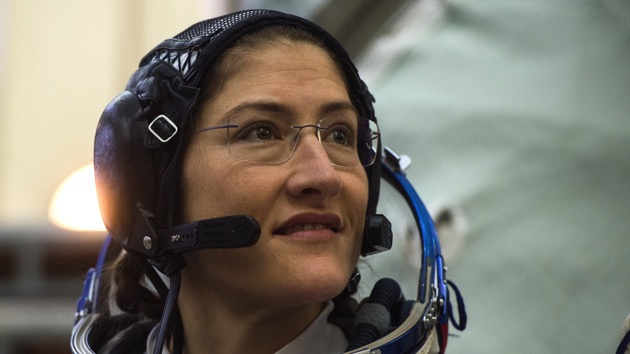 STR/AFP via Getty Images(NEW YORK) — A swim in the Gulf of Mexico paired with chips and salsa will be first for NASA astronaut Christina Koch when returns to Earth next week, having achieved a historic first: the longest single spaceflight for a woman — with more than 300 days on the International Space Station.”I didn’t necessarily know what this mission was going to turn into when I launched,” Koch told ABC News’ Senior Transportation Correspondent David Kerley in an interview from the space station. “But I think one of the things about the astronaut corps is that we are taught to be adaptable and to be ready for anything in a mission that comes our way.”The record was previously held by retired NASA astronaut Peggy Whitson, who set the record of 288 days in 2017. Koch surpassed that milestone back in December, when she hit 289 consecutive days in space

Five and a half years ago, @AstroPeggy took time to attend my first ever spacewalk training run as a mentor. It is beyond an honor to follow in her footsteps today. I can’t wait to pay it forward to the next explorers and watch them fly even higher. pic.twitter.com/jcrsWFp2D3

She will return on Feb. 6th after 328 days in space, first landing in Kazakhstan before taking a NASA Gulfstream plane back to the United States.NASA says they extended Koch’s mission so scientists could gather information on long-duration space flights — missions that go longer than the average six months — which could help guide research on future expeditions.Koch said she sees gathering this research as her contribution to science.”Just by virtue of being here and all of the physiological and human research studies that I’m a part of, it’s pushing the envelope on what we can say is normal for a long duration mission,” she said.Koch, a Montana resident and an avid hiker and rock climber, said she’s advocated for a study on the differences between women and men when it comes to the longer missions”I think the challenge is actually remaining vigilant, remembering that you really are surrounded by a hostile environment,” she said. “And that a single emergency or a single string of failures could bring you into a chance where you have to exercise some of that really important training that we had on the ground.”Koch and fellow NASA astronaut Jessica Meir accomplished another feat back in 2019 when they completed the first ever all-female spacewalk, stepping outside of the International Space Station together.

LIVE NOW: Tune in to watch the first #AllWomanSpacewalk in human history! ??‍? Starting at approximately 7:50am ET, @Astro_Christina & @Astro_Jessica venture into the vacuum of space to replace a failed power controller. Watch: https://t.co/2SIb9YXlRh

In breaking the gender barrier, Koch hopes the achievement becomes more common.”I think it is wonderful, actually, that the third time around it’s already become commonplace,” she said. “We recognize now that we’re doing the job the same as any of our colleagues and we’re all excelling.”She added, “We are held to the same standards, very high standards.”Copyright © 2020, ABC Audio. All rights reserved.