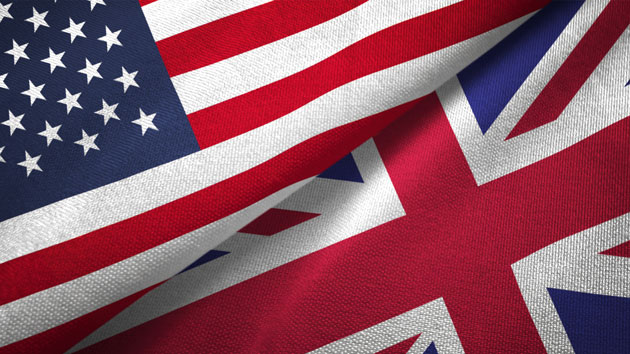 Oleksii Liskonih/iStock(LONDON) — The U.S. and U.K.’s top diplomats met late Wednesday in London, promising to build an “even stronger” bond between the two long-time allies, according to Secretary of State Mike Pompeo.But disagreements over several key issues have bogged down the so-called “special relationship,” which critics say has been bruised under President Donald Trump.In the last week, the U.S. denied the U.K.’s extradition request for an American diplomat’s wife who killed a British teenager in a car accident, infuriating the British public. The U.K. has also angered senior Trump administration officials by choosing to let Chinese telecom giant Huawei be used in its 5G network, despite months of U.S. lobbying.Pompeo arrived in London late Wednesday and had a closed-door meeting and then dinner with British Foreign Secretary Dominic Raab. The two discussed a new U.S.-U.K. free trade deal and “continuing cooperation on our shared goals,” Pompeo said in a tweet.

Happy to be back in London and meet with my counterpart @DominicRaab. I look forward to an even stronger #SpecialRelationship, bolstered by a new U.S.-#UK free trade deal, and continuing cooperation on our shared goals. pic.twitter.com/iMKREzVhki

The U.K. will exit the European Union on Friday after months of political turmoil over how and when to do so. Nearly four years after “Brexit” narrowly passed in a referendum, British Prime Minister Boris Johnson’s government reached a deal with the EU that passed the U.K. and EU parliaments.Trump has backed Brexit since the referendum and promised to sign a trade deal with Johnson’s administration as it seeks to temper the economic fallout of exiting the EU. But critics in the U.K. are concerned about what concessions Trump may demand to make a deal.A hawk on China, Pompeo, however, seems to care more about the Huawei decision, warning for months that using the Chinese telecom giant to supply new high-speed network equipment, known as 5G, would give the Chinese Communist Party access to a country’s citizens’ private data.Johnson’s government announced on Tuesday that it would allow Huawei to supply technology for up to 35% of its 5G networks, but not for the sensitive “core” parts that track smartphones, for example.En route to London, Pompeo told reporters that the decision was “a little unclear” and the U.S. was still reviewing it. While he is “always concerned about our national security,” he struck a more conciliatory tone — saying he would “work with the United Kingdom. … We’ll have a conversation about how to proceed.”In the U.K., however, the more emotional issue is the case of Anne Sacoolas and Harry Dunn. The wife of an American diplomat, Sacoolas killed Dunn, a British teenager, in a car accident on Aug. 27 near a British air base that also houses U.S. personnel.British authorities have charged Sacoolas with causing his death by dangerous driving. Sacoolas initially cooperated with investigators, but then left the country. Her lawyers and the U.S. government have maintained since then that she had diplomatic immunity at the time of the accident and until she left the country.Last Thursday, Pompeo denied an extradition request for Sacoolas to return to the U.K. and face prosecution, with a State Department spokesperson saying that granting it “would set an extraordinarily troubling precedent.”That has incensed Dunn’s family and many in the British public, with accusations that the administration is abusing diplomatic immunity or insulting the British legal system.”This is a lawless corrupt administration that appears intent on attacking even its closest international ally. If Trump and Pompeo think this is an end to the matter, they have another thing coming to them,” the Dunn family’s lawyers said in a statement on Thursday.Johnson and Trump spoke by phone Saturday, with Johnson urging “the need to secure justice for Harry’s family” and “the need for the individual involved to return to the U.K.,” according to a spokesperson for Downing Street.Copyright © 2020, ABC Audio. All rights reserved.

Blinken meets with Abbas amid heightened Palestinian tensions with Israel