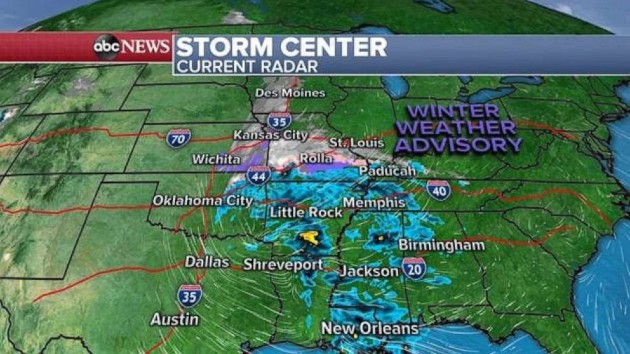 ABC News(NEW YORK) — A quick moving storm brought snow to parts of the Plains on Tuesday, including over a foot of snow in parts of Southwest Kansas. Thirteen inches of snow was reported outside of Liberal, Kansas, with 9.0 inches reported in Liberal itself.That storm has moved off to the east and is bringing a quick burst of snow to parts of Missouri Wednesday morning, where locally 1-2 inches of snow will be possible — especially between I-70 and I-44. No major accumulation of snow is expected, but a winter weather advisory remains in effect due to the slippery conditions.A large part of the U.S. is seeing relatively tranquil weather. Although there are disturbances out there, they are moving too fast to become truly organized, and additionally there is a lack of cold air across much of the country.The continued pattern of storms in the Northwest, diving down across the Rockies, will also bring several more rounds of gusty winds to the Southwest, especially Los Angeles and San Diego. Winds could gust 40-60 mph in the higher elevations of Southern California on Wednesday, and lingering into Thursday and Friday. The strong gusty winds could cause power outages and issues for high profile vehicles.Another storm slides into British Columbia on Thursday, before an atmospheric river reaches extreme northern Washington and southern Canada on Friday. There is still uncertainty about the exact track of the heaviest rain, but 1-3 inches of additional rain is possible over the weekend in the lowlands, and as much as 4-7 inches of heavy rain could be coming to parts of the Washington Mountains.The very wet pattern for the Pacific Northwest, as well as Southwest Canada, will cause rivers to rise over the weekend and into early next week. There is potential during this time frame for some of the rivers to reach moderate or higher flood stage in parts of Washington. With soils in the Northwest becoming increasingly saturated, the threat for landslides will also be increasing.KOMO-TV’s Scott Sistek is reporting in Seattle that the onslaught of storms will likely cause Seattle to at least tie its “all time record of most frequently rained-on month,” with 28 days of measurable rain in January.As some of these disturbances move through the Rockies and across the country, there is some potential for a couple of ingredients to come together to develop a storm near the East Coast this weekend. However, the latest forecast guidance is showing that the timing is off a little bit with the cold air to phase with the coastal low that will develop, thereby preventing the development of a significant weather event.While some uncertainty remains, it appears that the storm might be just far enough offshore to bring some rain showers, and then at times a couple of snow showers over the weekend. Therefore at this time, we are not expecting anything very significant.This has been the case most of the winter so far in the Northeast. Timing of the ingredients have been off for significant snow in the major cities. Additionally, like a large part of the country, much of the Northeast has seen periods of mild air.A particular note is that Boston and Philadelphia have both had more 60 degree days so far this winter than highs below freezing.And the relatively quiet and tranquil January is not just happening in the U.S. Across the entire Northern Hemisphere, the cold air is bottled up in the high northern latitudes of Alaska, Northern Canada and Russia. Considering we are in the peak of winter, it is notable to see that the cold air continues to not make significant surges into the mid-latitudes. A look across the globe shows not much cold air across the United States, China or Mongolia. Copyright © 2020, ABC Audio. All rights reserved.

In Hurricane Ian’s aftermath, the new head of FEMA faces a historic challenge

Next steps for victims of Hurricane Ian, from insurance claims to FEMA aid