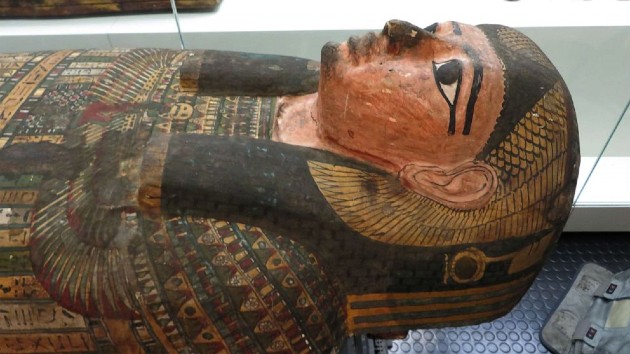 The University of Manchester(DUBLIN) — A team of experts believe they have solved a nearly 200-year-old mystery of how a famous Egyptian mummy came to die: They believe she was stabbed in the back.The 2,600-year-old mummy of a young woman, known as Takabuti, is on display at Belfast’s Ulster Museum in Northern Ireland, where it was brought from Egypt in the mid-19th Century.Until now, experts had been unable to say how Takabuti died, but a new study by a group of U.K. and Irish-based academics appears to show she was killed in a “violent knife attack.”The study, the results of which were made public Monday, said that new analysis of CT scans discovered a severe wound in the mummy’s upper back near her left shoulder, which may have been caused by a knife.That wound almost certainly caused her rapid death, according to Dr. Robert Loynes, a retired surgeon and honorary lecturer at the University of Manchester, who carried out the CT analysis.In addition, the experts said new DNA testing revealed Takabuti was genetically more similar to Europeans than modern Egyptians, an important discovery for helping scientists’ understanding of ancient Egyptian society from the period.”This study adds to our understanding of not only Takabuti, but also wider historical context of the times in which she lived,” professor Rosalie David, an Egyptologist from the University of Manchester, who was part of the study, said in a statement released by the university. “The surprising and important discovery of her European heritage throws some fascinating light on a significant turning-point in Egypt’s history.”The study “demonstrates how new information can be revealed thousands of years after a person’s death,” David said.”The findings finally solve the mystery of the mummy which has intrigued Egyptologists — and the public — since she was first unwrapped in Belfast in 1835,” the University of Manchester said in a statement.The new research — which was carried out over months — was conducted by around a dozen experts, including from the University of Manchester, Queen’s University Belfast, Kingsbridge Private Hospital and National Museums. The results were released to coincide with the 185-year anniversary of the mummy’s unwrapping in Belfast.Takabuti lived during the 25th Dynasty around 2,600 years ago and would have been in her mid-20s at the time of her death, experts believe. She was most likely a well-off married woman — “or mistress” — living in the city Thebes, now known as Luxor, where she was buried, the release said.She was brought to Belfast in 1834 by Thomas Greg, a merchant from Country Down, who donated her to the Ulster Museum. She was the first ancient Egyptian mummy to be brought to Ireland.Since she was first unwrapped in 1835, Takabuti has undergone extensive studies, Dr. Greer Ramsey, curator of archaeology at National Museums NI, said, including in recent years X-rays, CT scans, hair analysis and radio carbon dating. But DNA analysis and further interpretations of CT scans in the latest study provided new and “much more detailed information” about her, he said in a release.Professor Eileen Murphy, a bioarchaeologist from Queen’s University Belfast, said the new research had produced “some astounding results.””It is frequently commented that she looks very peaceful lying within her coffin, but now we know that her final moments were anything but and that she died at the hand of another,” Murphy said in a release.The scans also showed that the mummy has an extra tooth — 33 instead of 32 — which occurs in only 0.02% of populations — and an extra vertebrae, which only occurs in 2% of the population.Dr. Konstantina Drosou, a geneticist who took part in the study, said in the release that the DNA tests had also shown that Takabuti’s genetic footprint was relatively rare and had not, as far as she was aware, been found in any ancient or modern Egyptian population.That finding supports previous studies that suggest ancient Egyptians “were more genetically similar to Europeans than modern day Arabs,” she said. Copyright © 2020, ABC Audio. All rights reserved.