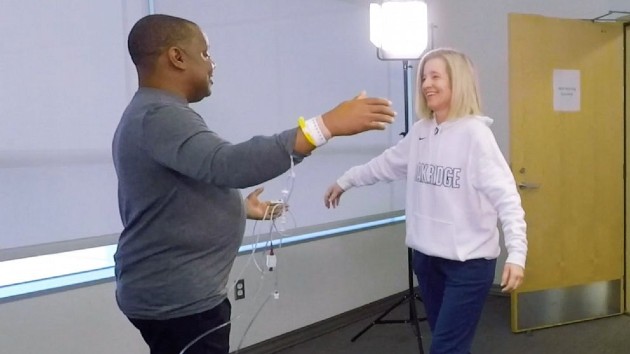 UT Southwestern Medical Center(ARLINGTON, Texas) — A principal in Texas proved that age, gender and race are no obstacles when it comes to fulfilling a life-saving good deed.Sarah Schecter, head of lower school at The Oakridge School in Arlington, donated her kidney to Nate Jones, a parent whose three children attend the school and who was in dire need of a transplant, according to ABC News Dallas affiliate WFAA-TV. “You think of a thousand reasons why you shouldn’t do it,” she told WFAA. “But it just couldn’t be avoided.”The educator said being generous, kind and brave are all “a big part” of what the school teaches its students, along with talking to them about character.Jones told WFAA that he noticed a change in his eyesight in 2018 that progressed quickly and prompted a visit to the eye doctor.Jones went to a retina specialist who urged him to see his primary care physician right away, and WFAA said they sent him to the ER, where he was diagnosed with acute renal failure and informed that a transplant was his only option.”How do you go from being healthy with no headaches, no nothing — and now you need a transplant?” the father of three questioned.His wife, Amenze Jones, told WFAA, “He just didn’t have any symptoms — no symptoms at all.”While the family said they kept their situation largely private, Jones’ wife said she mentioned his diagnosis to their children’s teachers and the principal in case it distracted them from their studies in class. William Jones is in third grade, his older sister, Sydney, is in fourth grade, and the oldest brother, Aaron, is in eighth grade.”Very shortly after she told me — like within days or maybe even hours — I felt a heavy burden,” Schecter said. “I didn’t want to be the person to give a kidney — who wants to go into surgery and do something crazy like that?”She continued, “To think they could lose their dad when they’re just kids in school, I just want them to have their dad.”After several months, the school head told Amenze Jones that she wanted to be tested to find out if she could be a donor for her husband.The mother of three said, “No one was surprised that she would do something like this, and that just goes to show you the type of person she is.””I know it’s the right thing to do but, am I still scared? Yes,” Schecter told WFAA six days prior to the big procedure. “I’m usually a very thinking kind of person, but on this — it’s just something I’m determined to do.”Schecter was a perfect match and the transplant operation was successfully completed on Jan. 13 at UT Southwestern Medical Center.The medical center captured a video of Schecter and Nate Jones when they saw each other for the first time post-surgery. The pair embraced in a tearful moment of relief and gratitude.”Bless you. Bless you. Bless you,” Jones said through tears. “I never thought this day would come.”While he pondered how he could ever “pay her back” and said that “words aren’t enough,” Schecter reminded him that now he should live out his life.”There’s something bold for you to do. God will give it to you,” she told him. “You’ve got a good kidney now. Just go forward and do what you need to do.” Copyright © 2020, ABC Audio. All rights reserved.