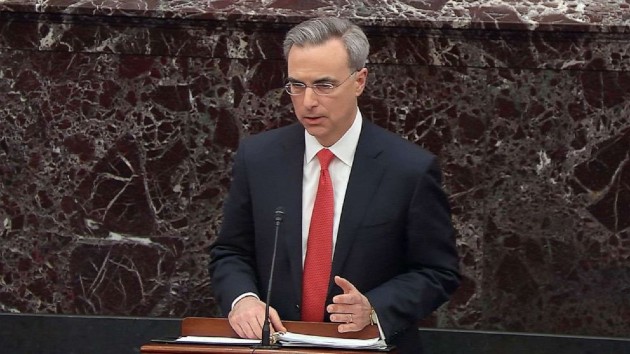 White House Counsel Pat Cipollone speaks on Jan. 28, 2020. (ABC News)(WASHINGTON) — President Donald Trump’s defense team wrapped up opening arguments Tuesday, setting the stage for two days of senators asking written questions before voting as early as Friday on whether to consider having witnesses.Democrats had new hope of getting witnesses they have fought for with word Tuesday evening that Majority Leader Mitch McConnell had told Senate Republicans that, as of now, he doesn’t have the votes to block them.The next phase of the trial — senators’ questions — gets underway Wednesday at 1 p.m.In the meantime, get caught up with the latest on the Senate trial with these three takeaways:1) Trump’s team discounts Bolton allegationsThe news from the weekend — that Trump’s former national security adviser John Bolton wrote in an unpublished manuscript that Trump had told him he was withholding U.S. military aid to Ukraine until Ukraine agreed to investigate the Bidens — continued to raise questions about the possibility of witnesses.Monday night, former Harvard Law School professor Alan Dershowitz, arguing for Trump’s defense team, briefly addressed the reported allegations made by Bolton, saying, “Nothing in the Bolton revelations, even if true, would rise to the level of an abuse of power or an impeachable offense.” He added, “You cannot turn conduct that is not impeachable into impeachable conduct simply by using words like quid pro quo and personal benefit.”On Tuesday, one of Trump’s lead lawyers, Jay Sekulow, in his Senate floor arguments, echoed what Dershowitz said the night before.“The trial of the leader of the free world and the duly elected president of the United States is a solemn duty. It is not a game of leaks and unsourced manuscripts,” he said, referring to the Bolton allegation which he called “inadmissible.”Sekulow added: “To be specific, you cannot impeach a president on an unsourced allegation. But what Professor Dershowitz is saying, even if everything in there was true, it constitutionally doesn’t rise to that level.”2) Trump lawyers: ‘Abuse of power’ not an impeachable offenseTrump’s team elaborated on another of Dershowitz’s arguments. He maintains that a president can’t be impeached for what he calls vague charges of “abuse of power” and “obstruction of Congress,” arguing the Constitution requires a specific crime or crime-like behavior.White House deputy counsel Patrick Philbin called the “abuse of power” charge made by the House impeachment managers “malleable,” and argued that it is based on finding a “subjective motive,” instead of “standards, or offenses.”“How do we tell under the House managers’ standard what an illicit motive is?” Philbin said. “How are we supposed to get the proof inside the president’s head?”“They want to make it impeachable if it’s just the wrong idea inside the president’s head,” Philbin continued.”The claim that foreign policy decisions can be deemed abuses of power based on subjective opinions about mixed or sole motives that the president was interested only in helping himself demonstrate the dangers of employing the vague, subjective and politically malleable phrase, ‘abuse of power’ as a constitutionally permissible criteria for the removal of a president,” Sekulow added.3) Senators’ questions beginning WednesdayHouse Majority Leader Mitch McConnell gave a preview of what the trial’s next steps will look like.Questions from senators will alternate between the two sides when the trial resumes Wednesday, for “up to eight hours during that session of the Senate,” McConnell said. He added the same is the planned for Thursday.McConnell said rules require questions must be submitted to the chief justice in writing.”During the question period of the Clinton trial, senators were thoughtful and brief with their questions and the managers and counsel were succinct in their answers. I hope we can follow both of these examples during this time,” he said.Roberts also made mention of the Clinton impeachment trial, quoting then-Chief Justice William Rehnquist as having “advised counsel on both sides that the chair will operate on a rebuttable presumption that each question can be fully and fairly answered in five minutes or less.””The transcript indicates the statement was met with quote laughter, end quote,” Roberts quipped, to laughter as well in the current Senate chamber.”Nonetheless managers and counsel generally limited their responses accordingly. I think the late chief’s time limit was a good one and would ask both sides to abide by it,” Roberts added. Copyright © 2020, ABC Audio. All rights reserved.