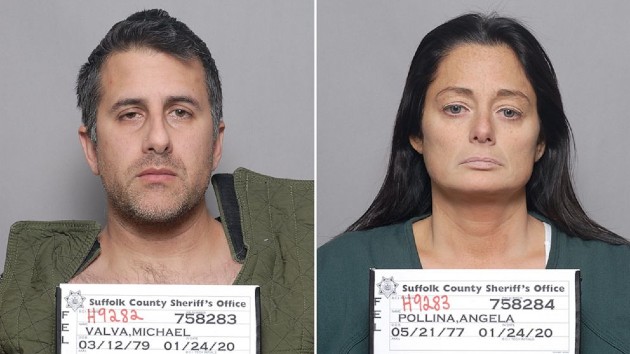 Suffolk County Correctional Facility(NEW YORK) — A viewing for the 8-year-old Long Island boy who froze to death has been scheduled for Wednesday, the same day his father and father’s fiancee are in court facing charges of second-degree murder.Thomas Valva died earlier this month of hypothermia after Michael Valva, 40, and Angela Pollina, 42, allegedly confined him to an unheated garage as temperatures outside plunged.The next day, police say Michael Valva called 911 and said Thomas had fallen in the driveway waiting for a school bus, but the boy had a body temperature of 76 degrees when he arrived at a local hospital. His death was ruled a homicide.Valva and Pollina, charged on Jan. 24 in Suffolk County District Court, face 25 years to life in prison if convicted. Lawyers for each suspect declined to comment to ABC News when reached on Tuesday.Valva, a New York Police Department officer since 2005, has been suspended without pay, a department spokeswoman confirmed. She declined to comment when asked about his disciplinary record.The viewing for Thomas is scheduled from 2 p.m. to 9:30 p.m., with a break from 4:30 p.m. to 7 p.m., according to the website of the funeral home holding Wednesday’s ceremony.Thomas’ biological mother, Justyna Zubko-Valva, said she alerted Suffolk County Family Court judges on several occasions to remove her three children from her estranged husband’s custody.As their bitter custody battle was ongoing in 2018, Zubko-Valva posted on Twitter messages, plus audio and video, of what she said were encounters with Thomas’ father.”The Child Protective Services and the Court are protecting the abusers of my children and swipe everything under the rug,” Zubko-Valva wrote Nov. 22, 2018. “I am heartbroken because my children are being purposely hidden from me, and unlawfully I am not being allowed to even see my children on Thanksgiving.”Suffolk County District Attorney Timothy Sini told reporters that Thomas and his 10-year-old brother, both on the autism spectrum, were “at times forced to sleep in the garage.”New York state Child Protective Services told ABC News in a statement, “We at OCFS are heartbroken to learn of this child’s death and have launched an investigation to review the Suffolk County Department of Social Services compliance with state law and regulations pertaining to child protective services.””While we cannot comment on child protective services cases, we are undertaking a thorough review of Suffolk County’s casework and, if necessary, will provide recommendations to Suffolk County on how to improve practice to prevent such a tragedy from happening again,” the statement continued.Zubko-Valva received temporary custody of her two surviving sons last week. That order was extended by a family court judge on Monday.It’s unclear why Zubko-Valva had lost full custody of her sons.Copyright © 2020, ABC Audio. All rights reserved.