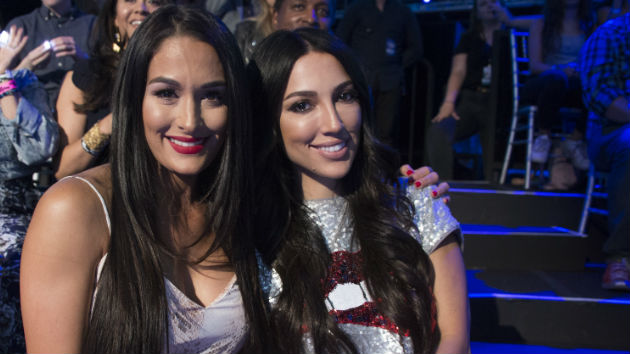 ABC/Eric McCandless(LOS ANGELES) — The Bella Twins announced some exciting news Wednesday. The former professional wrestlers are both pregnant.Nikki and her sister Brie, both 36, revealed to People magazine that they’re due a week and a half apart.The news comes after Nikki announced her engagement to professional dancer Artem Chigvintsev earlier this month. He popped the question in November last year while they were vacationing in France.Brie has been married to professional wrestler Daniel Bryan since 2014, and the couple have a 2-year-old daughter, Birdie Joe.Former WWE Brie star shared a photo alongside her identical twin, posing with baby onesies. “We are shocked like all of you!!! Never in a million years thought did I think @thenikkibella and I would be having pregnant bellies together!!!” Brie captioned her post.”Knowing us our babies will come the same day too lol!!!” she added. “We are excited for you all to follow us on this amazing journey!!! Love you Sister!!”Brie told People more about their reactions to finding out the news.

“People are going to think we planned it, but you can’t really plan pregnancy!” she said, adding that she and her husband had been trying for a second child but eventually put a pause on that plan after months of being unsuccessful.For her part, Nikki said she wasn’t trying to conceive. “It took even me a good week to come to terms with like, ‘Oh my gosh, I’m pregnant.’ I’m not ready for it.”  However, she said having a child is something she’s “dreamed of” her entire life.The sisters are excited for the future, and for sharing the ups and downs of their pregnancy journeys together.Brie tells People, “It’s…crazy because we both have the same symptoms. So we’ve been super nauseous.”