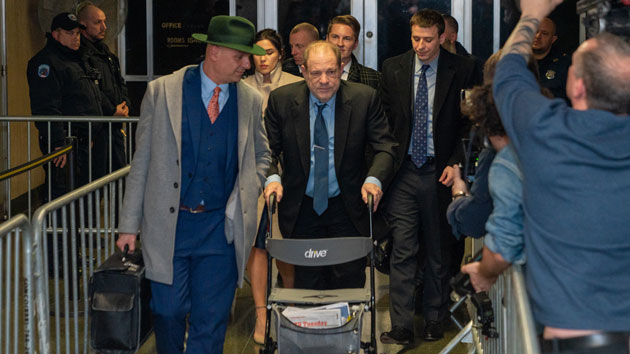 David Dee Delgado/Getty Images(NEW YORK) — Two more women took the witness stand in New York on Wednesday, weeping as they described unwanted sexual encounters with Harvey Weinstein in 2004 and 2005.Dawn Dunning and Tarale Wulff are two of a trio of “prior bad acts” witnesses called in to support prosecutors’ efforts to demonstrate a pattern by Weinstein of grooming and then sexually assaulting women looking for work in Hollywood.Weinstein is charged with performing a forcible sex act on Miriam “Mimi” Haleyi in 2006 and with raping an unnamed accuser in a Manhattan hotel room in 2013. Weinstein has pleaded not guilty to all charges and has denied ever engaging in nonconsensual sex.‘Three films’ for a threesomeDunning testified that Weinstein took an interest in her after meeting the 26-year-old aspiring actress in 2004 at a Manhattan nightclub where she worked as a waitress.Lunch and other meetings followed, she testified, and Weinstein invited her and her fiance to join him at numerous New York events. Dunning did a screen test for Weinstein’s company at his downtown office.One day Weinstein invited her to a boutique hotel in Manhattan where he was working. The suite was full of people, but he brought her into a bedroom and without warning slipped his fingers beneath her skirt and into her vagina, she testified.”I just kind of froze for a minute, then stood up,” Dunning said, with tears in her eyes. “He told me not to make a big deal about it. He apologized, said it wouldn’t happen again. And then we walked back out into the other room.”Within a month, Weinstein’s assistant Bonnie asked Dunning to meet the producer at a midtown Manhattan hotel to sign contracts for film roles for which she had been auditioning.She accompanied Bonnie to a hotel room, where Weinstein laid out three contracts on a table.”He said … ‘Here’s contracts for three films. I’ll sign them today if you slept (sic) with me and my assistant."”Dunning rebuffed the advance, and Weinstein grew angry.”He started screaming at me,” she said. “He said, ‘You’ll never make it in this business! This is how this industry works."”Weinstein then ticked off a trio of famous actresses he claimed slept with him to get ahead professionally.Terrified, Dunning said, she ran out the door and down the hallway to the elevator.”I stopped acting after that,” she said.Under cross-examination, Dunning acknowledged that she didn’t tell prosecutors about the incident when Weinstein allegedly put his hand up her skirt until last summer, long after she’d given numerous 2017 media interviews and spoken several times to prosecutors.She also acknowledged voluntarily returning to meet with Weinstein weeks after he allegedly violated her.”I told him, ‘I can’t"”Around noon, witness Tarale Wulff took the stand.Wulff, a model, testified that she met Weinstein while working as a waitress at an exclusive lounge above Cipriani’s Soho in Manhattan in 2005 and she told him she was an actress.”You’ve got a great look,” Weinstein told her, she testified.At some point that night, she said, he took her by the hand and led her to a secluded area above the upstairs lounge and began masturbating in front of her. She threw a bar towel at him and ran away, she said.Yet when Weinstein’s office called about a week after her first encounter and invited her to the office to read for a part in the 2006 movie “Pulse,” starring Kristen Bell, she said that she accepted.After waiting with the script in an empty room, an assistant came in and said, “Harvey wants to see you.” She said that she was taken downstairs and placed in car with a driver and taken to the producer’s Soho apartment.Once inside, she said, Weinstein forced her onto a bed and climbed on top of her.”I told him, ‘I can’t,’ and he answered, ‘Don’t worry, I had a vasectomy."””After I said ‘I can’t,’ it just went unanswered and I froze.”Wulff took long pauses before describing herself as “numb” and “frozen.””I just went blank and looked off,” she testified. “He put himself inside me, and he raped me. And I just remember getting up. I don’t remember from that moment. I just remember getting up.”Weinstein has not been charged with sexually assaulting Wulff.The next thing Wulff said she recalled was riding back in the car with Weinstein to his offices. She went back in “like nothing happened.” She said she never got to audition and did not receive a part in the movie.Under cross-examination, Wulff said she did not fight Weinstein off, report him to police or tell anyone what happened.Defense attorney Donna Rotunno suggested that when Wulff first met with prosecutors in 2017, she didn’t tell them that Weinstein “put himself inside” her — and only concluded that after meeting with a psychologist recommended by Manhattan prosecutors.”I don’t recall,” Wullf responded.Rotunno pressed Wullf on the point, asking whether it was true that prosecutors told her early on that she couldn’t be a part of the case because her memory of the incidents with Weinstein wasn’t clear enough.”Didn’t they tell you … your memories were too fragmented and they couldn’t use you on the stand?” Rotunno asked.”That’s not exactly what was said,” Wulff replied.”Something like that?” Rotunno asked.”They understood it’s been a long time and there are gaps in my memory,” Wulff replied.Wulff later acknowledged that she has seen the psychologist 55 times since she was first referred to her in 2017.If you or someone you know experienced sexual assault and is seeking resources, call the National Sexual Assault Hotline at 1-800-656-HOPE (4673).Copyright © 2020, ABC Audio. All rights reserved.