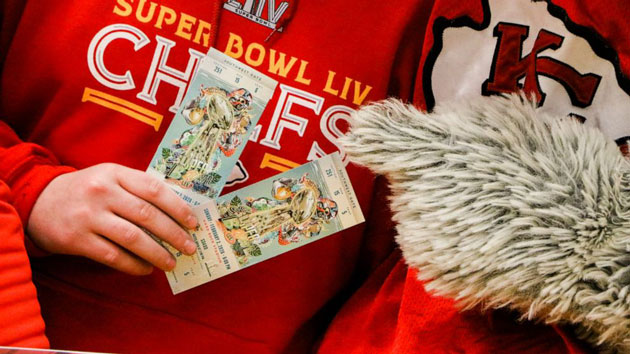 Will Carter(SAVANNAH, Mo.) — The big game won’t decided until Sunday, but one young Kansas City Chiefs fan already feels like a champion.Will Walker, a Missouri middle school student who has been battling cancer for five years, received a special Super Bowl surprise from his Savannah, Missouri, community during a pep rally on Wednesday.The 14-year-old who’s kept a positive attitude through a trying battle with synovial sarcoma — a rare form of cancer in the arms and legs — attended what he thought was a typical school assembly, but it quickly turned out to be a Chiefs pep rally with an unexpected twist. It was announced that Walker is going to Miami to watch his favorite team take on the San Francisco 49ers this Sunday.Will Carter, the marketing manager at Central Bank of the Midwest, told ABC News that their bank, which is a longtime partner of the Kansas City Chiefs, heard Walker’s story and jumped at the opportunity to help make his Super Bowl wishes come true.”The community was already raising money for him to do the trip, so the tickets were the missing piece in the whole thing,” he said. “We wanted to do something really exciting for him.”Unbeknownst to Walker, KC Wolf — the team’s mascot — hand-picked him from the bleachers and brought him down to the center of the gymnasium where he was presented with a giant poster and tickets to Super Bowl LIV.”Seeing his face yesterday and the kids’ support — there was probably 600 kids cheering — it just blew us backwards there was so much excitement in the auditorium. It was a really awesome moment,” Carter said.Prior to the pep rally, the tight-knit community had long been aware and involved in Walker’s journey.Fighting All Monsters (FAM), a Facebook community that helps children battling cancer and their families, backed a fundraising effort for the young Chiefs fan to help him make the trip and see his team play on the biggest stage in the NFL.”It’s amazing what FAM has done for me and everyone else trying to help me go to the Super Bowl,” Walker told ABC News Missouri affiliate KQ2.With more than $26,000 in donations through the Facebook fundraiser in just nine days, paired with the tickets from Central Bank of the Midwest, Walker’s dream to make the trip to Miami will soon become a reality.”It was really a group effort,” Carter said. “Everybody wants to give back and we’re a community bank so we very much believe in giving back and that’s what we pride ourselves on — everybody from businesses to individuals to the school were involved.””I’m gonna love it it’s gonna be super exciting,” Walker said of the Super Bowl matchup against the San Francisco 49ers. “It’s gonna be amazing to see ’em play, and win,” he added confidently. Copyright © 2020, ABC Audio. All rights reserved.

TikToker who claimed she had cancer allegedly scammed hundreds