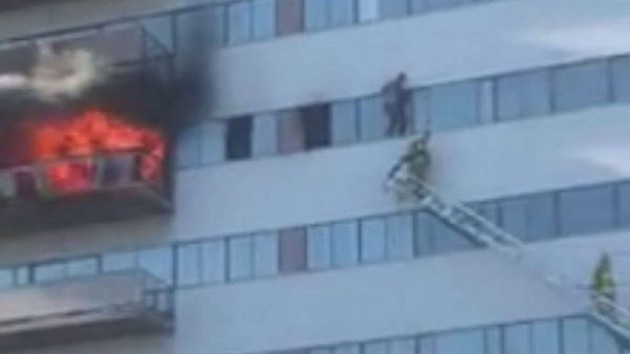 Valerie Meza(LOS ANGELES) — A 30-year-old man is in critical condition after a daring high-wire escape from a raging fire in a West Los Angeles high-rise Wednesday.Eleven people were injured in the blaze, which broke out on the seventh floor of a 25-story building on West Wilshire Boulevard in the neighborhood of Sawtelle, authorities said.Heavy flames and thick smoke poured from a cluster of broken windows as a man climbed out onto the side of the building and, clinging to the edge, inched his way away from the fire as firefighters worked to reach him by ladder.”For a long time, you were wondering where’s the ladder?” bystander Jenna Fabian, who watched from street level, told Los Angeles ABC station KABC-TV. “I think they were a little too far away from each other and the guy was just hanging on, I don’t know how. But firefighters were able to move the ladder a little bit closer to him.””This guy had started pretty far back and he climbed a good amount of the way to get to the right side of the building, to get away from the flames,” Fabian added. “I don’t know how he did that and managed not to fall.”Firefighters were ultimately able to position a truck ladder under the man and pull him to safety.The rescued man was one of 15 residents that were hoisted from the building by firefighters, KABC reported. It took more than 300 firefighters to extinguish the blaze, supported by four Los Angeles Fire Department helicopters, LAFD officials said.Among the injured was a 3-month old child, and another 30-year-old man who was listed in grave condition, LAFD Chief Ralph Terrazas told reporters at the scene. Most of the injured suffered smoke inhalation, and six were hospitalized, he said.The building, which does not have a sprinkler system, is one of 55 high-rises in Los Angeles that are exempt from sprinkler requirements because they were built before 1974, fire officials said. Copyright © 2020, ABC Audio. All rights reserved.