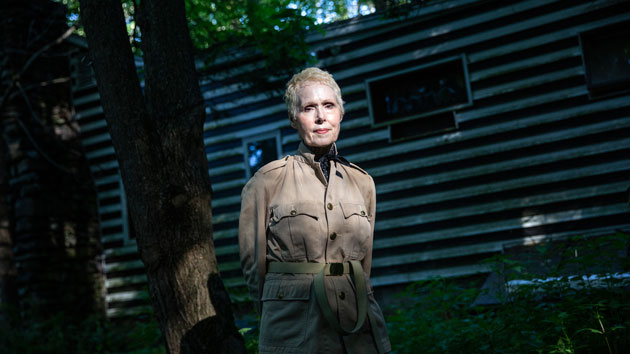 Eva Deitch for The Washington Post via Getty Images(NEW YORK) — E. Jean Carroll, the writer who has claimed President Donald Trump sexually assaulted her in a Bergdorf Goodman dressing room in the 1990s, asked Thursday for a DNA sample from the president to compare to the genetic material she says is on a dress she wore at the time of the alleged assault.Trump has consistently denied these allegations, which last year trigged a defamation suit from Carroll.“After Trump sexually assaulted me, I took the black dress I had been wearing and hung it in my closet,” Carroll said in a statement Thursday.“I only wore it once since then and that was at the photoshoot for the New York Magazine article about my book,” Carroll said. “Unidentified male DNA on the dress could prove that Donald Trump not only knows who I am, but also that he violently assaulted me in a dressing room at Bergdorf Goodman and then defamed me by lying about it and impugning my character.”“This case turns on whether Donald Trump lied when he said that he had not sexually assaulted E Jean Carroll and, in fact, had never even met her. Testing unidentified male DNA on the dress she wore during that assault has become standard operating procedure in these circumstances given the remarkable advances in DNA technology, particularly where, as is the case here, other potential contributors have been excluded,” Roberta Kaplan, Partner, Kaplan Hecker & Fink LLP, and counsel for E. Jean Carroll, said in a statement.”As a result, we’ve requested a simple saliva sample from Mr. Trump to test his DNA, and there really is no valid basis for him to object,” Kaplan said.The request came in a letter to the president’s attorney, who did not immediately respond to a request for comment from ABC News.Carroll requested a saliva sample from Trump.This is a developing story. Please check back for updates.Copyright © 2020, ABC Audio. All rights reserved.