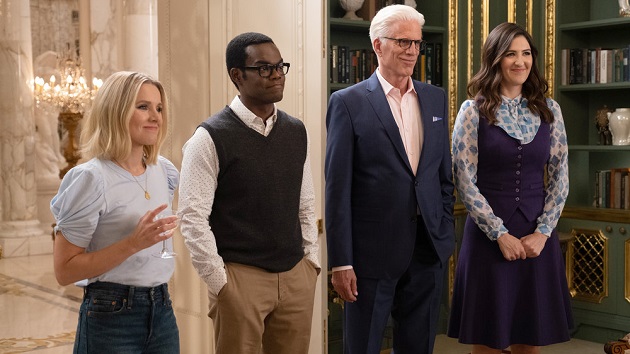 Colleen Hayes/NBC(LOS ANGELES) — If your version of The Bad Place is a world without any more new episodes of The Good Place, then, yes, this is The Bad Place.

After four seasons, the NBC fantasy comedy comes to an end Thursday night with a final double episode.

Speaking to ABC Audio, The Good Place star William Jackson Harper says the finale will reflect the “complicated” and “dense” nature of the show.

On The Good Place, Harper plays Chidi, one of four characters who find themselves in an afterlife divided into two sections: the heaven-like Good Place, and the hellish Bad Place.

Harper remains tight-lipped regarding the plot of the finale, but any one who’s seen at least the first season knows that The Good Place is always good for a twist or two.

“I love that it’s a comedy that expects a lot of its audience, and trusts the audience to come along with us on these weird turns that we take,” Harper says.

Harper is, of course, emotional about the show ending, though he reveals that a lot of the waterworks came courtesy of Carden.

“D’Arcy cries the most, and cries the fastest,” he says.

One thing he won’t miss, though, is The Good Place version of swear words, which replaces curse words with innocent facsimiles. As a now-seasoned New Yorker, Harper says he’s partial to the real deal, but admits he does “love a good ‘Mother-forker."”