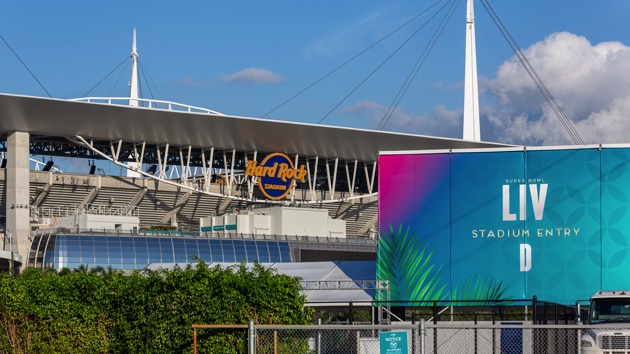 Yaroslav Sabitov/iStock(WASHINGTON) — The lowest ticket price to Super Bowl LIV is $4,000 — but imagine paying for it and the ticket be counterfeit? It happens more than people know, according to the Department of Homeland Security.”Every year, we’ve seen it … where a significant number of individuals have been already scammed by purchasing counterfeit goods and purchasing counterfeit tickets already for the Super Bowl,” Steve Francis, the head of the National Intellectual Property Rights Coordination Center, a division of Homeland Security Investigations (HSI), told ABC News.Francis cautioned those who plan to attend Sunday’s game in Miami between the San Francisco 49ers and Kansas City Chiefs, to only purchase tickets from an official vendor and to be mindful of the seller.In essence, he said if the price seems too good to be true, it probably is.The issue doesn’t stop there — as counterfeit items, such as jerseys and gear, are also popular during Super Bowl week.Whether it’s a Patrick Mahomes jersey or a Jimmy Garoppolo Jersey, agents offered some tips and tricks to spot the counterfeits.”Look at the stitching,” Lamar Jackson, the section chief for DHS’ Intellectual Property Unit, told ABC News. “You have very precise stitching on the original authentic products.”Another area where spotting a fake is simple, is looking closer at the holographic sticker placed on all official products sold by the National Football League. The holographic image is also paired with an official serial number.In once case, an official said the holographic sticker on a counterfeit item was obvious.”The hologram, when we look at the back is actually an NBA hologram,” Dave Dietrich a Special Agent for HSI based in Miami told ABC News, speaking of the holographic sticker.The agents say the sales of counterfeit goods spikes around big games, such as the Super Bowl.”So when you have that many people coming into town for an event, the fraudsters will come out and set up pop ups along the street corners to the venue,” Jackson said. “And they should always be wary of buying a street corner pop up. If you see the merchandise out front is a fraction of what it costs inside, chances are you’re buying a counterfeit product.”The officials stressed that cracking down on the sale of these counterfeit items helps to protect the economy.”In the case of smaller businesses, counterfeits can drive them out of business,” Jackson explained. “Our goal is to protect the US consumer, the US economy and protect the safety of the consumers.”Copyright © 2020, ABC Audio. All rights reserved.