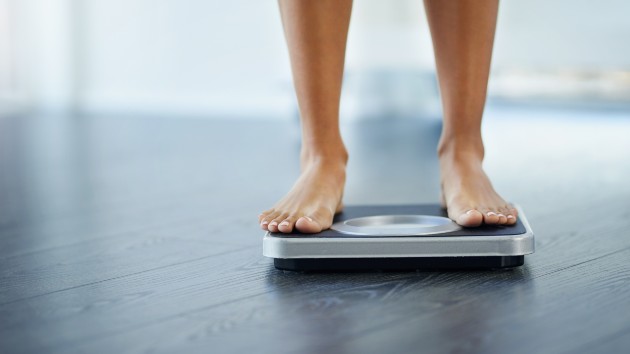 LaylaBird/iStock(NEW YORK) — Meghan Lenss, a middle school teacher, says she struggled with weight her entire life but in January 2017 decided to make a change. “I was just tired of being overweight,” Lenss, 28, of Marino Valley, California, told ABC News’ Good Morning America. “I think a lot of people don’t understand how much it affects your entire life.””I would always pretend to get a phone call while walking with my friends to cover for how much I was out of shape and how difficult it was to walk with them,” she said. “For every activity, my first thoughts were always, ‘Is there a weight limit’ and ‘Am I even going to have fun?"”Losing weight had been Lenss’ New Year’s resolution since she started making them, but at the start of 2017 she told a friend who had been diagnosed with pre-diabetes that she would try to lose weight with him.”That gave me the push to do it without too much pressure,” she said. “I felt that by doing that I didn’t have to admit that I was unhappy with how my body looked and if I failed it wasn’t as much a failure on my part because I was doing it under the facade of helping someone else.”Lenss started the new year by just cutting out the foods she knew were bad for her, like the fast food meals she ate daily, and choosing options she knew were healthier, like chicken and vegetables.She educated herself about diet and exercise by studying and following nutritionists and personal trainers on Instagram.”When I first started, I told myself I was going to eat 1,000 to 1,200 calories a day,” she said. “But Instagram helped me realize that other people were eating more and losing weight, so I found calculators online and realized I needed to be eating more to fuel myself.”Lenss knew she wasn’t yet comfortable going to a gym, so she bought an $80 elliptical machine, put it in her garage and used it, along with a stationary bike, daily.”I made eating healthy and exercise just part of my lifestyle, not an added chore,” she said. “It’s just a decision that I made. It’s part of my life now, so it feels weird when I don’t do it.”Three years after making the decision to transform her lifestyle, Lenss has lost 130 pounds.She exercises daily, including strength training, and follows a diet that includes protein oatmeal or yogurt for breakfast, chicken and vegetables and roasted potatoes for lunch, and salmon, vegetables and a carbohydrate for dinner, with rice cakes and bananas sprinkled in throughout the day as snacks.”I always tell people the best advice I can give them is not to eat this or do this in the gym but honestly just to believe in yourself that you can do it,” Lenss said. “If you don’t believe that you are capable of making the change in your life then you can’t do it.”Lenss started sharing her weight loss journey on Instagram to help keep herself accountable and now uses it as a supportive and motivating community of more than 30,000 followers.Her followers were there for her recently when she saw warning signs that she was becoming too focused on weight loss and scaled things back. She stopped weighing herself daily and allowed herself to gain some weight back in order to be the best version of herself.”I realized that perfection is not the goal,” Lenss said. “I’m not willing to starve myself to make the scale say something different.”With that perspective, Lenss is not missing out on a minute of her new life.”There are so many things where I used to say, ‘I don’t like doing that,’ but in reality it was just difficult for me to do,” she said. “I’m looking at life now with not a sense of ‘I can’t do that’ but with a sense of ‘I can’t wait to do that."””It’s changed my whole outlook on life,” she said.Lenss’ two tips for people who want to change their lifestyles are to start small and not make it complicated.Lenss said she started small by just stopping eating fast food and then worked her way up to bigger changes in her diet.”I just ate things that I knew weren’t bad for me, like chicken and vegetables … and I tried to educate myself more on nutrition,” she said.”I think a lot of people think they have to do one of these fad diets and I say no,” Lenss added. “I just stopped eating the food I knew was bad for me. It doesn’t have to be a complicated process.”