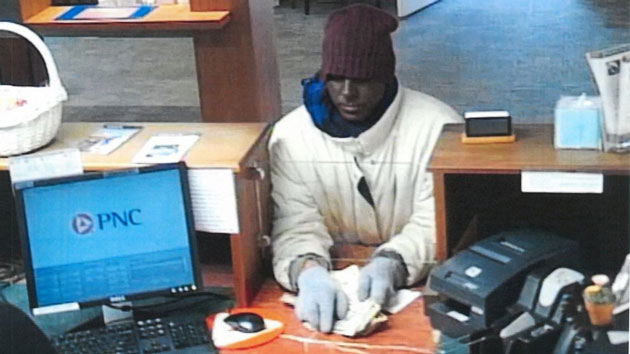 Perryville Police Department(PERRYVILLE, Md.) — Robber wearing blackface forgoes disguising handsThe heist at a PNC Bank in Perryville, Maryland, was about 15 seconds long, complete with a getaway car. Perryville Police DepartmentA manhunt is on for a brazen white suspect who held up a bank in Maryland while disguised in blackface, police said.The robbery occurred at PNC Bank in Perryville, about 43 miles northeast of Baltimore.Perryville Police Chief Allen Miller told ABC News on Thursday that the teller who was robbed initially described the robber as black, but after investigators reviewed security video, they noticed the crook’s white skin between his right gloved hand and jacket sleeve.”You could see that he was not a black male,” Miller said. “He had obviously covered his face in black something. I don’t know if it was makeup or what. We’re still investigating.”No one was injured in the heist.The robbery occurred around 1 p.m. on Tuesday, the chief said.”He walks up to the teller and he presents the teller with a note, and the note basically said, ‘Hey, I want all your money. Don’t give me a moneybag. I want all the money in the drawer,"” Miller said.The teller complied, emptying her cash drawer on the counter, Miller said.”He scooped up the money and left. It took about 15 to 20 seconds total for this to happen,” Miller said. “No weapon was displayed nor insinuated.”Investigators believe the suspect, believed to be about 5 feet, 8 inches tall and weigh 180 pounds, fled in a gray car. He was wearing a heavy jacket and a hat pulled down low.”In almost 40 years in law enforcement, this was the first time I ever remember a person going into a bank with blackface on,” Miller said. “This is a first for me in my career.”The FBI is assisting in the search for the suspect, investigators had several leads, Miller added.The incident is not the first time a white suspect has committed a robbery while wearing blackface.In 2018, 26-year-old Cameron James Kennedy, 27, robbed the New York-New York Hotel & Casino in Las Vegas of more than $23,000 while wearing blackface, according to the FBI. Kennedy, who pleaded guilty, was on federal parole for bank robbery when he pulled off the casino heist, according the FBI.In October 2019, 32-year-old Joshua Coster, was arrested after police alleged he wore blackface paint to rob the same bank twice in a one-month period in Wichita, Kansas, according to a statement from the Wichita Police Department. Costner and his alleged accomplice, 28-year-old Stephanie Steele, have both pleaded not guilty to aggravated robbery.Asked if the Perryville bandit could face additional charges for wearing blackface during the commission of a robbery, Miller said that would be up to the Cecil County state’s attorney.”Once our report is completed and we do capture him, we will submit it to the state’s attorney for review,” Miller said. “Obviously, he’ll be charged with robbing a bank, but I don’t know if additional charges will be placed on him. We’ll confer with the state’s attorney in reference to that.”Copyright © 2020, ABC Audio. All rights reserved.