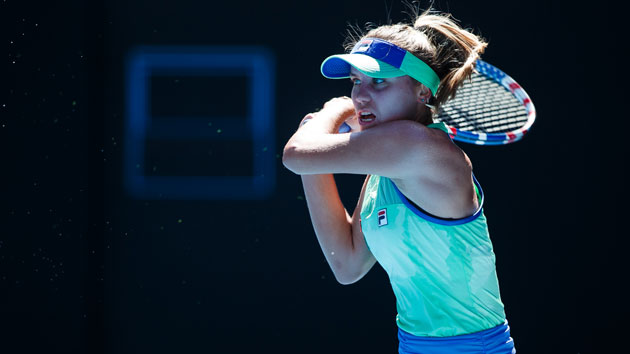 Chaz Niell/Getty Images(NEW YORK) — Sofia Kenin was not the American most tennis fans expected to make it to this year’s Australian Open final.Yet it will be the 21-year-old — and not other American favorites like Serena Williams and Coco Gauff — playing in Saturday’s final.”I’m not shocked,” Kenin said after her semifinal win Thursday. “It’s a dream come true for me. I’ve always dreamed about this. Of course, I believed in myself.”Kenin made it to the final after a 7-5, 7-6 win against Ashleigh Barty, the reigning French Open champion and world No. 1 who was vying to become the first Australian to win the Australian Open singles title in more than four decades.”I was playing, I knew I was in the semifinal. It was just great. I’m so happy I was able to share the court with Ash,” Kenin said. “Yeah, after the match, of course it’s pretty emotional. It’s the finals. It’s something different, it’s surreal. [I’m] so grateful for it.”Kenin beat Gauff, the 15-year-old American phenom, in three sets in the fourth round, after defeating Ons Jabeur of Tunisia in the third round and another American player, Ann Li, in the second round.She will face Spain’s Garbiñe Muguruza in Saturday’s women’s singles final.Kenin, seeded No. 14 going into Australia, has won three singles titles in her career.She was born in Moscow, Russia, and moved to the U.S. as an infant. Her family settled in Pembroke Pines, Florida, where Kenin was homeschooled, according to her Women’s Tennis Association (WTA) bio.Kenin’s father, Alexander, who remains her coach to this day, started teaching her tennis at age 5, and she was on a magazine cover by age 6, according to ESPN.Kenin shared a video on Instagram last year of her being interviewed at age 7 about her ability to take on Andy Roddick.Fourteen years later, Kenin is playing for the chance to win her first Grand Slam title.The last American female to win the Australian Open single’s title was Williams in 2017. Copyright © 2020, ABC Audio. All rights reserved.