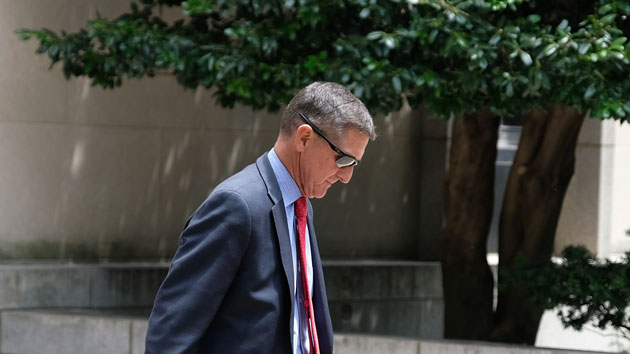 Alex Wroblewski/Getty Images(WASHINGTON) — President Donald Trump’s one-time national security adviser Michael Flynn is blaming his former attorney for his criminal conviction, saying in an 11th-hour court filing that he was “misled, misinformed and betrayed” by his lawyer and so should be allowed to withdraw his guilty plea for lying to federal agents.”The multiple instances in which Mr. Flynn’s former lawyers conflicts of interest and actions fell completely short of professional norms, thus depriving him of the constitutionally mandated effective assistance of counsel, nullified his opportunity to make informed decisions about his own case, and it grossly prejudiced his defense,” Flynn’s lawyers wrote in a 207-page court paper filed Wednesday afternoon.Government attorneys responded to the claims with their own filing Wednesday afternoon, that dismissed them as “false allegations.” The prosecutors did, however, clarify that they would not object to Flynn being granted probation. The government’s earlier sentencing recommendation called for zero to six months in prison.Flynn was the first of five high-ranking advisers to Trump who pleaded guilty and offered his cooperation during the investigation by special counsel Robert Mueller into Russian meddling in the 2016 campaign. His attempt to backtrack from the plea deal marks the latest in a series of moves Flynn has made aimed at staving off a jail sentence. In December 2018, prison time appeared all but unavoidable for the retired three-star general — U.S. District Court Judge Emmet Sullivan ripped into Flynn for engaging in misconduct while working in the White House. Flynn’s attorney at the time, Robert Kelner, immediately requested and received a sentencing delay. Flynn has used the ensuing year to change attorneys and re-tool his approach.On Wednesday, his new attorneys, Sidney Powell and Jesse Binnall, argued that Flynn would not have gotten into the plea agreement in 2017 if he had been given “constitutionally adequate advice” from Kelner.Kelner’s firm, Covington and Burling, issued a statement to ABC News in response to Wednesday’s filings.”Under the bar rules, we are limited in our ability to respond publicly even to allegations of this nature, absent the client’s consent or a court order,” a spokesperson for Covington and Burling wrote in the statement.Flynn pleaded guilty in December 2017 to lying to federal investigators about his discussions with Russian Ambassador Sergei Kislyak during the presidential transition in December 2016 and cooperated with prosecutors on multiple cases under the guidance of his former counsel.The relationship between the government and Flynn soured when Flynn changed his legal team and refused to testify as a government witness in another criminal case involving his former business associate Bijan Kian. Kian was charged with making false statements in foreign lobbying filings prepared by Flynn’s former counsel.Powell and Binnall said that the government demanded Flynn give a “false” testimony against his former lobbying partner and say that he “knew and intended” to sign false filings in his lobbying work, which would lead him to breach his plea agreement by not telling the truth.A source close to the Flynn family told ABC News that they want charges thrown out, not probation or prison time.The government on Wednesday afternoon dismissed the claims by Flynn’s counsel as “false allegations,” stressing that the government “explicitly stated that it did not want the defendant to lie and was only interested in presenting the defendant’s truthful testimony” in the Kian case. Flynn didn’t end up testifying at Kian’s trial after prosecutors expressed new doubts about his pledge to cooperate with their investigative efforts and the judge in his ex-business partner’s case threw out the jury’s guilty verdict for lack of evidence. Copyright © 2020, ABC Audio. All rights reserved.