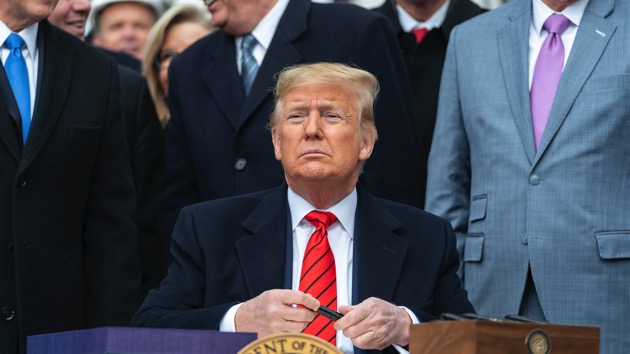 Official White House Photo by Shealah Craighead(WASHINGTON) — President Donald Trump’s campaign previewed their massive Super Bowl ad-buy on Thursday by releasing one of the two 30-second spots they plan to run this Sunday which lean into the president’s economic record, focusing heavily on record low unemployment.”America demanded change and change is what we got,” the ad starts off, quickly pivoting to tout the president’s glowing economic record. Within its 30-second run-time the ad specifically touts the unemployment rate hitting a 49 year low, which it did back in May 2019, and singles out unemployment rates for black and Latino Americans sinking to historically low levels during Trump’s first term in office.The new ad will look to to capitalize on the president’s economic record in front of the largest television audience all year. And the issue the campaign choose to focus on is one that has boosted his political prospects in the polls as of late. Since taking office there’s been a 20-point drop in personal economic uncertainty, falling from 63% of Americans saying they were worried about maintaining their standard of living to 43%, according to the latest ABC News/Washington Post poll.The president receives a share of credit as 56% approve of his handling of the economy, up 10 points since early September to a career high.In December, the U.S. economy added a solid 145,000 new jobs and the unemployment rate remained at a 50-year low, according to the Department of Labor Statistics.The campaign also announced that they’re splitting their 60-second Super Bowl ad buy into two separate ads, stating that their other 30-second ad will be “seen by the world for the first time when it actually airs.”The timing of the Trump campaign’s release of the first of two Super Bowl ads also comes just hours after 2020 candidate Mike Bloomberg previewed his own full-60 second ad, which focused on combating gun violence.The Trump campaign spent in total $10 million on the national spot to air during the Super Bowl. Copyright © 2020, ABC Audio. All rights reserved.