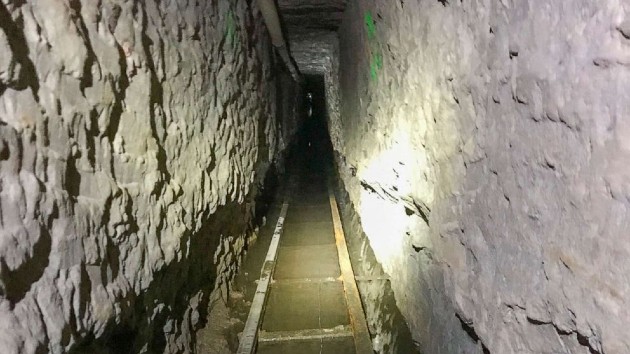 U.S. Customs and Border Protection(SAN DIEGO) — Authorities are revealing what they called “the longest illicit cross-border tunnel” from Mexico to the San Diego area.The tunnel, which begins in Tijuana, Mexico, was located in an industrial area a half-mile from the Otay Mesa Port of Entry and was concealed by a small industrial building, according to a Wednesday news release by the U.S. Border Patrol San Diego sector and its partners.Deputy Chief Patrol Agent Aaron M. Heitke said during a news conference Wednesday that the initial discovery had been made on the U.S. side due to “intelligence gathering and technologies.” He would not specify which technologies had been used.”With the help of Mexico, we were able to exact a location of the tunnel itself,” he said.The tunnel along the Southwest border “travels north into the U.S. bending slightly west and extending an astonishing 4,068 ft. from the border, with a total length of 4,309 feet,” the news release said.The tunnel, which measures 5.5 feet tall and 2 feet wide, “includes an extensive rail and cart system, forced air ventilation, high voltage electrical cables and panels, an elevator at the tunnel entrance and a complex drainage system,” the news release said. The tunnel also has an average depth of 70 feet from the surface.”They could’ve smuggled any … contraband they wanted to,” Heitke said Wednesday. “They’ll try anything they can to get their illicit products into the United States.”Border Patrol said that an offshoot of the tunnel had been found at approximately 3,529 feet into the U.S.”This offshoot traveled several feet then came to an end without breaching the surface. The main tunnel extended another city block at which point agents discovered several hundred sandbags blocking the suspected former exit of the tunnel in the Otay Mesa warehouse district within the U.S.,” Border Patrol said in its release.Border Patrol said no arrests or seizures had been made after the tunnel’s discovery.”The sophistication and length of this particular tunnel demonstrates the time-consuming efforts transnational criminal organizations will undertake to facilitate cross-border smuggling,” said Cardell T. Morant, acting special agent in charge of Homeland Security Investigations San Diego, in the release.Authorities said the second-longest tunnel in the U.S., which was found in San Diego in 2014, was a little less than 3,000 feet long.“As efforts to strengthen security on our Southern border increase, Mexican drug cartels are forced underground to smuggle their deadly drugs into the United States,” said Drug Enforcement Administration Special Agent in Charge John W. Callery. “The sophistication of this tunnel demonstrates the determination and monetary resources of the cartels.”An investigation into the tunnel was ongoing, authorities said.