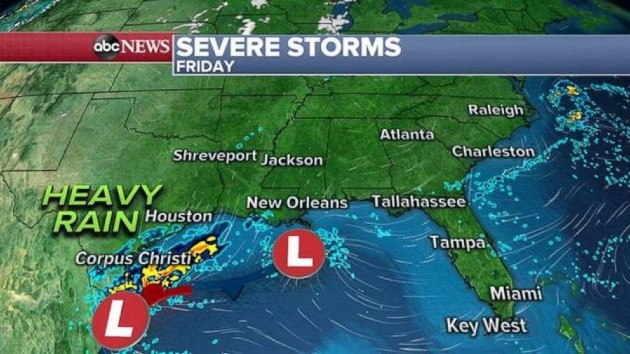 ABC News(NEW YORK) — A new storm will quickly develop in the southern U.S. and track across the Gulf of Mexico toward Florida, where severe weather is expected Friday night and Saturday — the beginning of Super Bowl weekend.The storm will begin development later Thursday night and into Friday. Heavy rain will spread across parts of Southern Texas and then along parts of the Southern Gulf Coast. The storm quickly races off to the East on Friday, with some of the precipitation expanding north along the East Coast into the mid-Atlantic by Friday night.However, along the southern tip of this system, there should be enough shear, moisture and heat to produce a severe weather threat beginning Friday night and lasting into part of Saturday.Forecast guidance is showing a rather well defined line of storms heading to Florida late on Friday, with heavy rain and gusty winds a likely threat for most of the state.However, by Friday night and Saturday, the storms pick up some shear, and thunderstorms will likely turn severe. There is a slight risk Friday night into Saturday for Southern Florida including all of Miami and all of the Florida Keys. Low level shear could produce tornadoes during the overnight period on Friday and on Saturday. Additionally, there is a risk for waterspouts in the Gulf of Mexico, and toward the Florida Keys as the storms approach.Additionally, the storms will pack damaging winds, bringing some large hail and lightning. The storms will also quickly dump a good amount of rain, with areas likely to pick up 1 to 2 inches, which could cause flash flooding — especially in some of the more urban areas of Southeast Florida.This entire system clears Florida by Sunday, and the Super Bowl in Miami will be sunny and in the 70s.An atmospheric river of moisture is lining up with another storm system headed toward the Pacific Northwest.The storm that will usher in the most moisture will arrive in the Northwest on Friday and last into Saturday. The core of this storm will first slide into Canada, but some of the heavy moisture is expected to move into parts of Washington, late Friday into Saturday.While some uncertainty remains where the heaviest rain will fall, there is increasing confidence that locally 4 to 6 inches of rain is coming for parts of Washington state. This system will also usher in some milder air and raise the snow levels in the mountains.While an additional 1 to 2 feet of snow will be possible in the higher elevations of the Cascades, the main concern with this setup will be heavy rain on Saturday soils — including some of the foothills. Additionally, there could be some snowmelt.Therefore, the risk for river flooding this weekend and early next week in Washington is increasing, with several rivers forecast to head into moderate or close to major flood stage. This could have impacts on some of the towns in northwest Washington.Additionally, there is potential for landslides due to parts of this region seeing nearly 1 to 2 times their average January rainfall. Copyright © 2020, ABC Audio. All rights reserved.