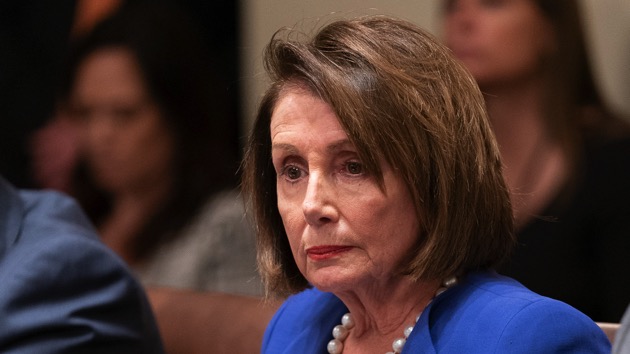 White House Photo by Shealah Craighead(WASHINGTON) — As the Senate appears to move towards acquitting President Donald Trump on two articles of impeachment, House Speaker Nancy Pelosi refused to rule out further action to hold the president accountable.Pelosi was questioned on whether the House would attempt to compel former National Security Adviser John Bolton to testify in the lower chamber should the Senate trial end without his testimony.”This is in the Senate now,” Pelosi, D-Calif., said, holding onto optimism that the upper chamber would call on witnesses. “I hope and I pray that the senators can handle the truth and listen to not only John Bolton, but other witnesses as well.”She added, “We’ll see what happens after that.”Pelosi declined to say whether the House would attempt to bring other civil officers appointed by the president up for impeachment, but hinted she would not be satisfied if the Senate trial ends without new witness testimony.”Well, I’m not getting to that. We are in the Senate,” she stressed. “We did our job. We had a strong case of impeachment of the President of the United States. No matter what the senators have the courage or not to do, he will be impeached forever.”She added, “We believe our argument was strong enough for removal, but we do believe that there’s more truth for the American people to know.”Pelosi further pressed the House Democrats’ argument for the removal of Trump from office.”[Trump] undermined our national security, he jeopardized the integrity of our elections and he violated the constitution for his own political and personal benefit,” she said.Even as the presumption emerges that the Senate will soon acquit the president, Pelosi said she’s “still hopeful” the Senate will convict Trump.Nevertheless, she repeatedly hinted that the House could take further action.”We are right now, prayerful and hopeful that the Senate will have the courage to hear the truth about the president’s action,” she said. “And then we’ll see what we do next.”Trump’s legal team warned on Wednesday that opening the door to new witnesses would prolong the trial indefinitely, jamming up legislative business as impeachment is fought in the courts. But that didn’t seem to deter Pelosi.”I don’t think they made the case at all. I think they tried to avoid the truth,” Pelosi said. “First they say, well why didn’t we wait for the courts to go through this and that? Well because justice delayed is justice denied.”She said the Senate would save “a great deal of time” by subpoenaing the proper people now.”We have a situation where, again, the fate of our nation is riding on how this is resolved,” Pelosi said. “It isn’t about just one person. It’s about the precedent that it sets for the future. It’s not about whether you like Donald Trump or not. It’s not personal, it’s not political, it’s not partisan. It’s about patriotism.”She said, “It’s about undermining the system of checks and balances, and that is what they are doing on the Senate floor.”Copyright © 2020, ABC Audio. All rights reserved.