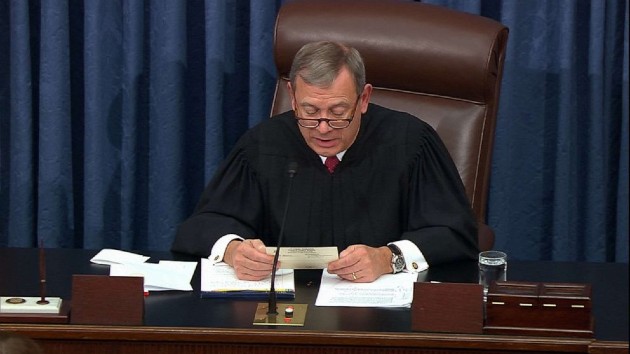 ABC News(WASHINGTON) — Wednesday marked the beginning of the next phase in President Donald Trump’s impeachment trial as senators submitted questions to both his defense team and the House impeachment managers.Those questions, which will last up to 16 hours over two days, offered a glimpse into what senators are thinking, including some lawmakers who could cast the key votes on whether witnesses will be allowed at the trial. The Senate could decide that as early as Friday.Accounts from ABC News reporters inside the chamber described a new mood compared to the long days of senators listening in silence, with many of them paying close attention and some vigorously taking notes.The formal process for asking questions begins when senators stand up, tell Chief Justice John Roberts they have a question and then hand a card with the question written on it to a Senate page. The page then walks down the center aisle and the card is passed up to Roberts, sitting on the dais.Here are three things to know from Wednesday’s proceedings.1) All eyes on GOP Sens. Collins and MurkowskiWhen news broke Tuesday night that Majority Leader Mitch McConnell had told Republicans he didn’t yet have the votes to block witnesses, Democrats had renewed hope that they could get the Senate to hear from key players, especially Trump’s former national security adviser, John Bolton.A few Republican senators have indicated that they would be open to the possibility of witnesses, including Sens. Susan Collins of Maine and Mitt Romney of Utah. Democrats also hoped to get the support of Sens. Lisa Murkowski of Alaska and Lamar Alexander of Tennessee to cross the 51-vote threshold needed.The Wednesday session began with a dramatic moment when Collins rose with the first question — on behalf of herself and her fellow GOP centrists, Romney and Murkowski.”If President Trump had more than one motive for his alleged conduct such as the pursuit of personal political advantage, rooting out corruption and the promotion of national interests, how should the Senate consider more than one motive in its assessment of article one?” Roberts read from their question card.Collins and Murkowski were back in the spotlight later in the day when they asked Trump’s defense team a question that seemed to suggest Collins doesn’t completely believe the claim that Trump was purely interested in ridding Ukraine of corruption.They asked whether Trump ever mentioned the Bidens in relation to corruption in Ukraine before former Vice President Joe Biden entered the presidential race. And if so, to whom and when.The president’s lawyer didn’t have a strong answer.”It wasn’t thoroughly pursued in the record so I can’t point to something in the record that shows President Trump at an earlier time mentioning specifically something related to Joe or Hunter Biden,” White House deputy counsel Patrick Philbin said.2) Questions on Bolton dominate the dayLead House manager Adam Schiff, responding to a question from Senate Minority Leader Chuck Schumer, said, “There’s no way to have a fair trial without witnesses,” referring to Bolton.”To turn him away, to look the other way, I think is deeply at odds with being an impartial juror,” Schiff said, after Schumer mentioned some of the reported allegations from Bolton’s book in his question.The New York Times has reported that Bolton claims in his manuscript that Trump had tied the Ukraine aid to an investigation into the Bidens.But whether senators will hear from him remains up in the air, especially after a warning from the White House.On Wednesday, ABC News reported that the White House sent a letter to Bolton about his book manuscript, saying publication would be blocked because it “appears to contain significant amounts of classified information” and that some of the information is classified as “TOP SECRET.”The White House’s letter states that until the information is removed, the manuscript cannot be published.Trump last week said Bolton testifying would be a “national security problem.”Despite the White House warning, Democrats continued to push for Bolton to testify.”Again, if you have any lingering questions about direct evidence, any thoughts about anything we just talked about, anything I just relayed or that we’ve talked about the last week, there is a way to shed additional light on it,” said Rep. Jason Crow, D-Colo., a House impeachment manager.”You can subpoena ambassador Bolton and ask him that question directly,” he said when asked about the allegations Trump tied military aid to an investigation into Bidens.3) Dershowitz on a president and ‘the public interest’Alan Dershowitz, responding to his former Harvard Law School student Sen. Ted Cruz, R-Texas, argued that even if there had been a quid pro quo involving Trump’s political motives, it shouldn’t result in an impeachment.”Every public official that I know believes that his election is of the public interest,” he said.”If a president does something which he believes will help him get elected in the public interest, that cannot be the kind of quid pro quo that results in impeachment.”Schiff pushed back.”All quid pro quos are not the same. Some are legitimate and some are corrupt and you do not need to be a mind reader to figure out which is which,” Schiff said. “For one thing, you can ask John Bolton.”On Thursday, senators will have another eight hours to ask more questions. Copyright © 2020, ABC Audio. All rights reserved.