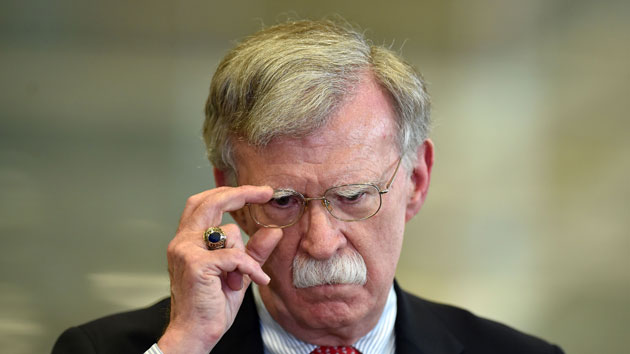 SERGEI GAPON/AFP via Getty Images(WASHINGTON) — President Donald Trump and his allies are promoting comments made by former national security adviser John Bolton as part of their impeachment defense, even as those same voices have sought to undermine Bolton’s credibility in the wake of allegations reputedly contained in his forthcoming book.On Wednesday afternoon, Jay Sekulow, the president’s personal attorney, alluded to an interview Bolton taped in August with Radio Free Europe, during which the former aide described Trump’s conversations with Ukrainian President Volodymyr Zelenskiy as “warm and cordial” and noted that the two discussed efforts to curb corruption in Kiev.Within hours of Sekulow’s presentation on the Senate floor, the Bolton interview clip ricocheted through Republican media channels. Both the Republican National Committee and the White House flagged Bolton’s soundbite in emails that were blasted out to reporters, before ultimately landing at a familiar destination: the president’s Twitter feed.Bolton’s comments in the August interview bear little resemblance to accounts documented in a manuscript of his unpublished book, according to reports in The New York Times.The newspaper reported this week that Bolton’s manuscript contains allegations that the president sought to withhold military aid to Ukraine as leverage to pressure Zelenskiy to announce investigations into the president’s domestic political opponents.Trump on Monday pushed back on allegations reportedly laid out in Bolton’s book and accused him of exaggerating claims “only to sell a book.”The president’s legal team has followed his lead. On Tuesday, Sekulow called the contents of Bolton’s book “inadmissible.” On Wednesday — less than an hour after Sekulow mentioned Bolton’s comments to Radio Free Europe — another of the president’s lawyers, White House deputy counsel Patrick Philbin, referred to Bolton as “disgruntled.”Completing the curious shift in his political standing, Democrats have showed signs of support for Bolton, the longtime Republican stalwart, and took note on Wednesday of former White House Chief of Staff John Kelly’s vote of confidence in Bolton’s credibility.”If John Bolton says that in the book, I believe John Bolton,” Kelly told the Sarasota Herald-Tribune.In stopping short of a full-throated endorsement of Bolton, Democrats have instead used revelations in his book to amplify their position that he and other witnesses should be called to testify in the Senate’s impeachment trial.”Don’t take my word for it about John Bolton,” Rep. Adam Schiff, chairman of the House Intelligence Committee, late Wednesday. “I’m no fan of John Bolton — although I like a little more than I used to — but you should hear from him, you should want to. Don’t take General Kelly’s view for it, make up your own mind.”ABC News reported Thursday that Senate Republicans believe they have enough votes to prevent witnesses from being called. The full Senate could vote on a likely acquittal as early as Saturday. Copyright © 2020, ABC Audio. All rights reserved.