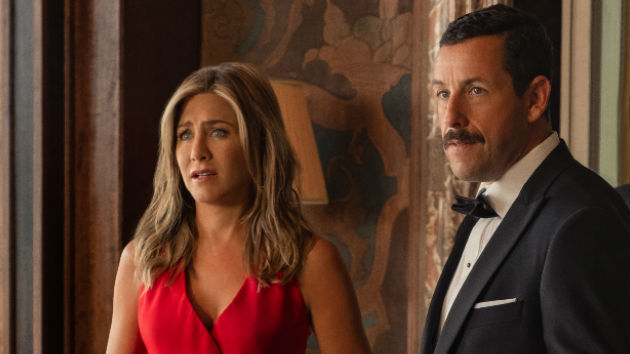 Netflix/Scott Yamano(LOS ANGELES) — Netflix is famously not shy about shelling out generously for talent.  And while its not known what they paid to do so, the company clearly wants to stay in business with Adam Sandler.

The streaming giant extended its six-movie deal with the former SNL star to 10.

Part of that reason is no doubt that Sandler’s most recent film, the very successful Murder Mystery in which he co-starred with his pal Jennifer Aniston, topped the streaming service’s Feature Film list in terms of views for 2019.  His previous film, his 2015 Western Ridiculous Six, was at one point the most popular original movie on the streaming service, which estimates its viewers have spent two billion total hours watching Adam Sandler movies.

The star, currently winning praise for starring in the drama Uncut Gems, also returned to stand-up with his 100% Fresh special, which debuted on Netflix back in 2018.

“Whether you know him as Sandman, the Water Boy, Billy Madison, Happy Gilmore, Nick Spitz or simply Adam, one thing is clear: our members can’t get enough of him,” said Netflix chief content officer Ted Sarandos in a statement. “They love his stories and his humor, as we saw with Murder Mystery. So I could not be more excited to extend our partnership with Adam and the Happy Madison team and deliver more laughs around the world.”