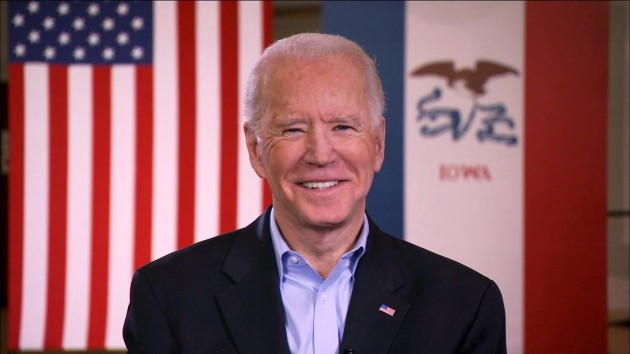 ABC News(NEW YORK) — In an exclusive interview on ABC News’ Good Morning America, former Vice President Joe Biden gave his reaction to the ongoing impeachment trial of President Donald Trump in the U.S. Senate and the latest comments from two of his top rivals for the Democratic nomination, Sen. Bernie Sanders and former South Bend, Indiana, Mayor Pete Buttigieg.Biden expressed exasperation at the defense from Trump’s defense team.”I find this defense astounding. ‘Yeah, he did it, but it doesn’t matter.’ I mean, George Washington is rolling over in his grave,” Biden told ABC News Chief Anchor George Stephanopolous.When pressed over comments he made during the 1999 impeachment trial of President Bill Clinton warning against impeachment votes along party lines, Biden pushed back, saying the facts make it clear that Trump has violated the Constitution.”It’s not a partisan impeachment. He violated the constitution, period,” Biden said. “Even if it’s party line vote, it just…reflects on those who know, in fact, in their heart and their head that, in fact, it’s a violation of the constitution to do what he did.”The former vice president has been aggressively campaigning in Iowa in the final days until the caucuses, embarking on a nine-day bus tour that is crisscrossing the state as he makes his final pitch to the voters.In the waning days of the campaign in Iowa, Biden has leaned heavy into the message that he is the candidate that can best unify the Democratic party and withstand a bruising general election campaign with Trump.In a speech billed as a pre-buttal to Trump’s rally in Des Moines, Iowa on Thursday morning, Biden argued that the “character of the nation,” is on the ballot in the 2020 election.”Does it matter if a president lies? Does it matter if a president has no moral compass? Does it matter if a president believes they’re above the law? Does it matter if a president is petty? Mean? Cruel? Spiteful? Does the character of a president matter? I believe the answer to each and every one of those questions is ‘Yes,"” Biden told a crowd in Waukee, Iowa, on Thursday.Biden continues his final push to Monday’s caucuses with three more campaign events in eastern Iowa on Friday.Copyright © 2020, ABC Audio. All rights reserved.