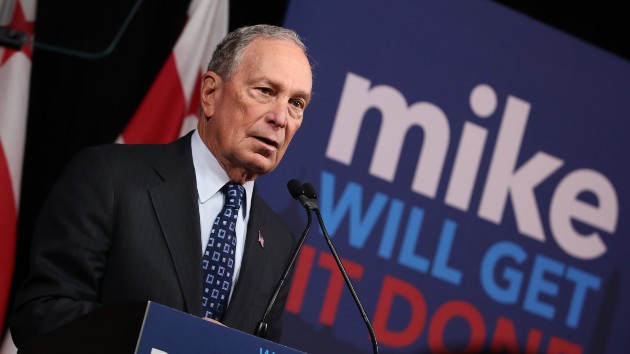 Mark Wilson/Getty Images(WASHINGTON) — The starting bell of 2020 is about to ring. And while the rest of the 2020 Democratic field is in Iowa, slogging through the snow and unruly fervor of caucus-eve, Mike Bloomberg will be touring across California.Most of the 2020 Democratic presidential contenders — including the sitting senators who find themselves juggling time between the impeachment trial and the trail — are vying for the 41 Hawkeye State delegates up for grabs. However, the former mayor of New York City will be sweeping through the Golden State as he prospects for the 415 California pledged delegates that are there for the taking.He’ll pan south through the state, starting in Sacramento, then head to Fresno and then Compton, talking up the importance of early voting. Those three cities are dynamic, diverse and very different in their demographics; it remains to be seen whether, and how, Bloomberg will tailor his message toward voters in each city who are already primed for their say in the 2020 primary come March 3.Then, come Tuesday, as the other candidates head to New Hampshire for the ABC News/WMUR-TV debate and then the state’s primary, Bloomberg will head to Michigan and Pennsylvania for counterprogramming. President Donald Trump won both of those key battleground states in 2016 by a slim margin, and is investing time and energy in those states now.It’s all part of Bloomberg’s overall campaign gambit: Bypass the four early states — Iowa, New Hampshire, South Carolina and New Hampshire — and key in on the Super Tuesday spots with a high delegate yield. Moreover, he’s specifically honing in on the swing states Trump picked up in 2016 that Democrats “should” have won, like Pennsylvania, Ohio and Michigan.Meanwhile, Bloomberg’s surrogates will be kicking off a “Get It Done Express” bus tour, which will spend the next 10 days heading from California to North Carolina, with surrogates and supporters making stops along the way. Bloomberg himself will not be there, making it a dipartite campaign strategy with a wingspan from coast to coast.Bloomberg’s energetic efforts at outreach demonstrate his appetite for seeking voters where they live; he has visited every single one of the Super Tuesday states upon which he’s staking his entire 2020 bid.Bloomberg’s campaign points directly to the delegate math that’s central to their strategy.“Iowa and New Hampshire have 65 delegates. California, Michigan, and Pennsylvania have 726,” Galia Slayen, a national spokeswoman for the campaign, said in details shared first with ABC News.With impeachment proceedings looming large over the current election efforts, Bloomberg is looking to benefit from the lush state spread that he’s been investing in with his vast fortune.His campaign has already fanned out across 35 states, and he has a staff of more than 1,000, including more than 700 field staff across all the Super Tuesday states, as well as 300 staffers in his New York headquarters. Copyright © 2020, ABC Audio. All rights reserved.

Mark Kelly and Blake Masters set to debate in Arizona: When to watch, what to expect