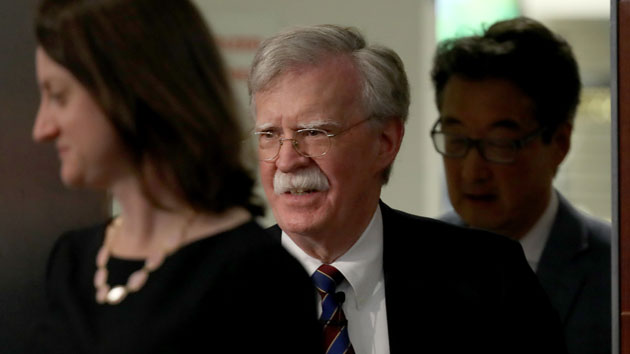 Win McNamee/Getty Images(WASHINGTON) — President Donald Trump directed his then-national security adviser John Bolton to help his personal lawyer, Rudy Giuliani, secure a meeting with Ukrainian President Volodymyr Zelenskiy, according to more details from Bolton’s unpublished book reported by The New York Times on Friday.If true, the account of the May 2019 meeting — two months before the president’s July 25 call with Zelenskiy — would mark the earliest known instance in which the president was directly involved in the pressure campaign against Ukraine to get an investigation opened into the Bidens, according to the report.Bolton alleges Trump asked him to call Zelenskiy to “ensure Mr. Zelenskiy would meet with Mr. Giuliani, who was planning a trip to Ukraine to discuss the investigations that the president sought,” according to the Times’ description of the book. Bolton writes he never placed the call, the Times account said.Acting White House Chief of Staff Mick Mulvaney, White House counsel Pat Cipollone, and Giuliani, who is alleged to have played a key role in the pressure campaign against Ukraine, were present at the Oval Office meeting during which Trump made the request, Bolton also wrote, according to the story.ABC News has not independently reviewed Bolton’s manuscript.In a statement to the New York Times, given after the article was published, Trump categorically denied Bolton’s account.“I never instructed John Bolton to set up a meeting for Rudy Giuliani, one of the greatest corruption fighters in America and by far the greatest mayor in the history of N.Y.C., to meet with President Zelensky,” Trump said. “That meeting never happened.”On May 10, Rudy Giuliani did send a letter to President Zelenskiy — saying he was acting with the “knowledge and consent” of President Trump– requesting a meeting with the newly elected president.The date of that letter, turned over to House investigators by Lev Parnas, an indicted associate of Giuliani, would appear to match the general timeline Bolton describes.The report comes just as the Senate is set to vote on whether to call witnesses, including Bolton, in Trump’s impeachment trial before closing arguments and a final vote on acquittal. It is not yet clear what effect the report might have on senators.Democrats need four Republicans to vote with them in order to reach a majority necessary to win on calling witnesses, but it appears they do not have the votes to do so.Republican Sen. Lisa Murkowski of Alaska announced just after the report surfaced that she would be voting against hearing witnesses, leaving Democrats likely short of the 51 votes they need.Late Thursday night, key Republican Sen. Lamar Alexander of Tennessee announced he would not vote in favor of calling witnesses in the trial.Republican Sens. Susan Collins of Maine and Mitt Romney of Utah both announced they would vote in favor of calling witnesses.Copyright © 2020, ABC Audio. All rights reserved.