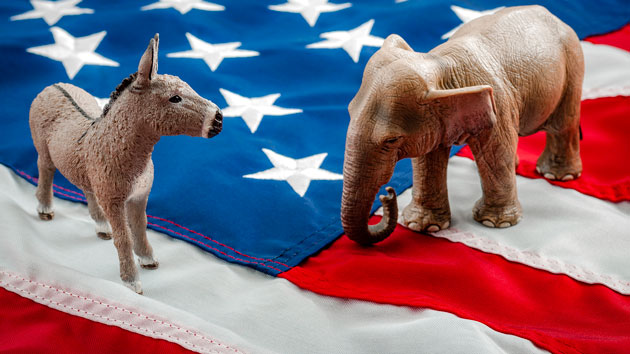 Moussa81/iStock(LAS VEGAS) — The Democratic National Committee has eliminated the individual donor threshold to qualify for the primary debate being held in Las Vegas on Feb. 19, opening the door for former New York City mayor Mike Bloomberg to face off against his competitors for the first time in a national debate since he entered the race.Running an unconventional campaign by focusing on delegate-rich states that vote after the four early voting states, billionaire Bloomberg has been self-funding, refusing to take donations from supporters and essentially barring himself from qualifying for a Democratic primary debate — which have up until this point required candidates to attain a specific number of unique donors in order to participate.”If they would have changed the rules, I’d love to debate … Sure, why not?” Bloomberg said in an interview on “The Tonight Show” on Tuesday. “It’s a good chance to show the public that you can take the grief as well as give it out. And I think I have good answers to the kind of questions that reporters would ask you, and some cute remarks for those that come from the other candidates.”Now, Bloomberg may get his chance to face some of his competition, including three front-runners who have already qualified for this debate, according to an ABC News analysis: former Vice President Joe Biden, Massachusetts Sen. Elizabeth Warren and Vermont Sen. Bernie Sanders.”We are thrilled that voters could soon have the chance to see Mike Bloomberg on the debate stage, hear his vision for the country, and see why he is the strongest candidate to defeat Donald Trump and bring our country together,” Kevin Sheekey, Bloomberg’s campaign manager, said in a statement, responding to the change.In order to qualify for the ninth debate, hosted by NBC and MSNBC in partnership with The Nevada Independent, candidates have to either meet a polling threshold or acquire at least one pledged delegate out of the Iowa caucuses or New Hampshire primary.Candidates have two ways to meet the polling threshold: Get at least 10% support in four national polls and/or polls conducted in Nevada or South Carolina — referred to as the four-poll threshold — or get at least 12% support in two polls conducted in Nevada and/or South Carolina, referred to as the early state polling threshold.In order for polls to count toward the four-poll threshold, they must be sponsored by different organizations, or if sponsored by the same organization, be covering different geographical areas. However, polls can be conducted by the same organization and/or covering the same region to count toward the early state polling threshold.All qualifying polls must be released between Jan. 15 and 11:59 p.m. on Feb. 18 — the day before the debate.According to the DNC’s guidelines, polls must be sponsored by one of the following entities or pairs of entities: Associated Press; ABC News/Washington Post; CBS News/YouGov; CNN; Fox News; Monmouth University; National Public Radio; NBC News/Wall Street Journal; NBC News/Marist; New York Times; Nevada Independent/Mellman Group; Quinnipiac University; USA Today/Suffolk University or Winthrop University.Bloomberg already has one poll toward the four-poll threshold, as does former South Bend, Indiana mayor Pete Buttigieg, according to ABC News’ analysis. No other candidates have any polls toward either threshold.A senior adviser to the Sanders campaign, Jeff Weaver, blasted the DNC for changing the rules at this point in the primary.”To now change the rules in the middle of the game to accommodate Mike Bloomberg, who is trying to buy his way into the Democratic nomination, is wrong,” Weaver said. “That’s the definition of a rigged system.”The other billionaire in the race, businessman Tom Steyer, also hit the DNC, saying it’s “just plain wrong” that the party changed the rules now, but didn’t “in the past to ensure a more diverse debate stage.””Back in December, I called on the DNC to open up the debate requirements so that more candidates, including candidates of color, would be able to participate,” Steyer said in a statement. “The Democratic Party should be doing everything possible to ensure a diverse field of candidates.”He added, “Instead, they are changing the rules for a candidate who is ignoring early states voters and grassroots donors.”On Wednesday, businessman Andrew Yang said the DNC shouldn’t change its debate qualifying rules.”I don’t think it’s on the DNC to change their criteria because Mike is essentially saying, ‘I don’t care about the debates. I don’t care about meeting these thresholds,’ because we all know he could,” Yang said this week at a Bloomberg News event in Des Moines, Iowa. “It would take him, I would say, probably two weeks if he just put the resources in place.”Based on ABC News’ analyses, both Yang and Steyer have yet to qualify for the Feb. 19 debate, but have qualified for the Feb. 7 debate in New Hampshire, which ABC News is hosting in partnership with ABC-affiliate WMUR-TV and Apple News.Minnesota Sen. Amy Klobuchar took a different stance, indicating that she’d like to see Bloomberg in the debates.”I’d be fine with him on the debate stage, because I think that instead of just putting your money out there, he’s actually got to be on the stage, and be able to go back and forth so that voters can evaluate him in that way,” Klobuchar said on MSNBC Tuesday.According to ABC News’ analysis, Klobuchar has qualified for the New Hampshire debate, but not the Nevada debate. Copyright © 2020, ABC Audio. All rights reserved.