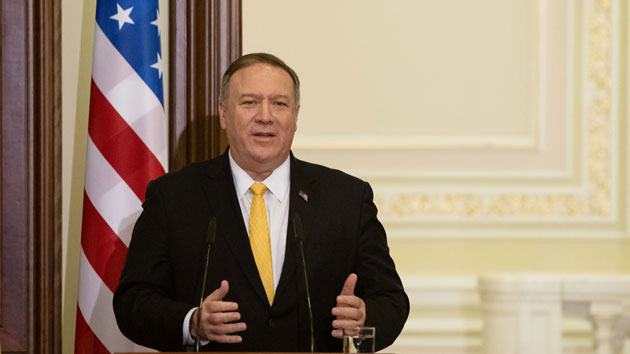 Anastasia Vlasova/Getty Images(KYIV, Ukraine) — Secretary of State Mike Pompeo declined to directly dispute allegations reportedly contained in an unpublished manuscript of former national security adviser John Bolton’s forthcoming book, saying he would not comment on press reports “off in the lands of the hypothetical.”The New York Times reported in recent days that Bolton’s unpublished manuscript contains allegations that President Donald Trump sought to withhold military aid to Ukraine as leverage to pressure Kyiv to announce investigations into the president’s domestic political opponents.In Kyiv on Friday, Pompeo downplayed the report’s credibility — but did not explicitly deny its contents.”So you’re now commenting on reports on an alleged book about notes that someone claims to have seen,” Pompeo said Friday during an interview with ABC News’ Kyra Phillips in Kyiv. “I don’t engage in that. I’ve said everything I have to say about what took place.”Asked whether he trusts Bolton as a reliable narrator — a subject of increasing tension and political jockeying in the Senate impeachment trial of President Trump — Pompeo demurred”There were times that we always had to work through things to make sure we had it accurate between us,” Pompeo said, adding, “To be honest with you, I probably won’t read the book.”Pompeo sought to deflect questions about the nature of the impeachment probe, including whether he and Ukrainian President Volodymyr Zelenskiy discussed former Vice President Joe Biden or his son, Hunter, who has drawn criticism for his role serving on the board of a Ukrainian oil giant while his father fronted U.S. policy toward Kyiv.”We talked about all the things that matter,” Pompeo said. “We didn’t talk about all the silliness that’s gone on back there in Washington.”Asked if he ever heard President Trump explicitly link aid to Ukraine to investigations into the Bidens, Pompeo said, “I don’t talk about conversations with the president. I’m telling you what our policy was.”The timing of Pompeo’s visit to the former Soviet state coincides with a crucial moment in the Senate impeachment trial of his boss — the basis for which involves the Trump administration’s posture toward Kyiv in late summer of 2019.Pompeo has repeatedly said he would honor any lawful requirement to testify as part of the impeachment trial, and in Davos last week, President Trump told reporters he “would love to have Mike Pompeo” testify — even as the White House has signaled its intention to block senior administration officials from going under oath. As ABC News has reported, Senate Republicans appear poised to block a vote to call witnesses, making Pompeo’s testimony increasingly unlikely.In his interview with ABC News, Pompeo insisted the impeachment trial played a negligible role in his meeting with the Ukrainian leader.”We didn’t get involved in the noise in Washington, D.C. We were focused on the future and the path forward for Ukraine, and for the relationship between America and Ukraine,” Pompeo said. “We talked about all the things that [President Zelenskiy] needs to do to deliver on the commitments that he made during his campaign.”Pompeo said he and Kyiv’s leadership instead focused on strengthening ties and conveying a reassurance of unwavering American support, calling Ukraine “the hinge of freedom that sits right on the edge between Russia and Europe.”But Pompeo’s warm public comments about U.S.-Ukraine relations mark a striking departure from comments attributed to him in private. Last week, after a contentious interview with a National Public Radio reporter, Pompeo allegedly asked rhetorically, “Do you think Americans care about Ukraine?”After the confrontation, the State Department banned another NPR reporter from traveling with Pompeo on his visit to Kyiv. Earlier this week, President Trump lauded Pompeo’s handling of the situation.Asked whether he regretted his handling of the situation with NPR, Pompeo doubled down on his criticism, claiming the broadcaster “doesn’t represent what I believe the American people need and deserve.”From Kyiv, Pompeo will continue on to Belarus, Kazakhstan and Uzbekistan. Copyright © 2020, ABC Audio. All rights reserved.