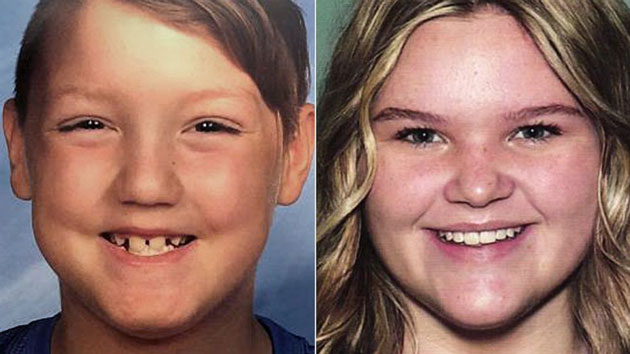 National Center For Missing and Exploited Children(REXBURG, Idaho) — The oldest son of a mother at the center of a missing children’s case is pleading with her to do “everything you can to fix this.”Colby Ryan made the tearful plea Friday, just one day after Lori Vallow failed to bring her 7-year-old son and 17-year-old daughter, who have not been seen since September, to authorities in Idaho.Authorities believe Joshua “JJ” Vallow and Tylee Ryan are in danger, and that Vallow knows either where they are or what has happened to them.”I want you to step up more than anything in the world,” Ryan said in a video posted to YouTube. “Step up and just do the right thing.”Ryan, in his early 20s and Vallow’s son from her second of five marriages, said he held out hope Thursday that there would be some answers to the mysterious case.When Vallow didn’t show with the children, he said: “it just made everything worse.”Vallow, who lived in Rexburg, Idaho, until leaving in November 2019, was spotted in Hawaii over the weekend with her husband of three months, Chad Daybell. The children were not with them and police believe they were never in Hawaii.Vallow was ordered to bring the children to either the Idaho Department of Health and Welfare of Rexburg police by early evening Thursday. She did not do so and may now be subject to civil or criminal contempt of court, according to the Rexburg Police Department.”I feel like I’ve just lost everything in such a short amount of time,” Ryan said.In a message directed at Vallow, he told her that he loves her no matter what and just wants to see JJ and Tylee.”I love you ’cause you’re my mom, but at the end of the day I’m still in the same spot. Everybody’s still in the same spot with no answers,” he said.Ryan spoke emotionally about the children and their lives.Of Tylee, Ryan said, “I know that you’ve had to do a lot of stepping up and I’m so sorry you didn’t get to just have that normal school, friends and everything.”He called JJ “so smart” and “so beautiful.””I miss playing with you. I miss spending time with you,” Ryan said.Ryan also thanked Charles Vallow, Lori Vallow’s former husband and the adopted father of JJ, who was shot and killed by her brother, Alex Cox.”I just want to thank you for being there for our family when we needed you,” he said. “You stepped up so fast. You took us all in.”Alex Cox fatally shot Charles Vallow in July 2019, police said. Police are looking at the case as self-defense that stemmed from an altercation between the two inside Lori Vallow’s then-Chandler, Arizona home.Cox was then found unresponsive in his Gilbert, Arizona, home in December 2019. He was later pronounced dead, and a spokesperson for Gilbert police previously told ABC News the department still was waiting for autopsy results to determine the cause.In between Vallow and Cox’s death, Chad Daybell’s wife also died under circumstances now believed to be suspicious, authorities said.The bewildering case, including rumors of a cult affiliation, has offered few answers and the next steps for Lori Vallow remain unclear.She and Daybell were last seen in Hawaii Wednesday afternoon local time.Copyright © 2020, ABC Audio. All rights reserved.