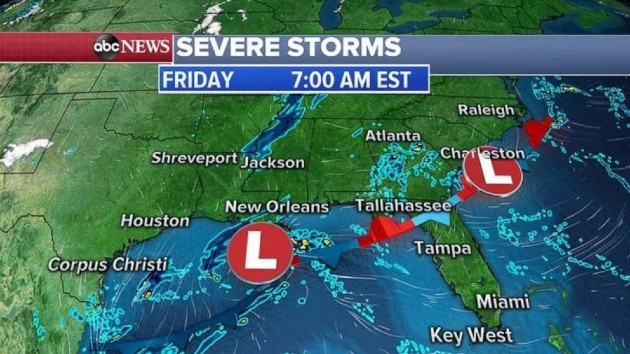 ABC News(NEW YORK) — A strong storm system is developing in the South Friday morning that’s expected to bring severe storms to Florida with damaging winds, hail and a few tornadoes.The first round of storms will move through Florida late Friday evening with a chance of tornadoes and damaging winds in the southern half of the state.The second wave of storms will move through southern Florida including Miami on Saturday late morning and into early afternoon, with an increased threat of damaging winds and tornadoes.The storm system should move out of Florida by Saturday evening, and dry weather is expected on Sunday for the Super Bowl in Miami.Meanwhile, a plume of subtropical moisture, called an atmospheric river, is aimed at the Pacific Northwest Friday into this weekend, where very heavy rain could cause flooding and mudslides.A flood watch and high wind warning have been issued for western Washington near Seattle as this unsettled weather moves in.Some areas could see nearly a half a foot of rain, with winds gusting to 60 mph.Flooding and mudslides are the biggest threat for the area.This stormy weather will move into the Rockies this weekend with heavy snow, gusty winds and crashing temperatures by Sunday evening. Some areas could see 1 to 2 feet of snow. Copyright © 2020, ABC Audio. All rights reserved.