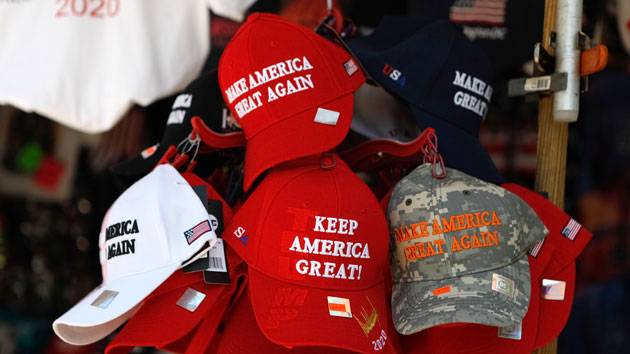 P_Wei(DES MOINES, Iowa) — In an effort to counter Democrats ahead of next week’s Iowa caucuses, President Donald Trump brought his campaign rally road show to the Hawkeye State on Thursday, just days before the first contest.The president kicked off his Iowa speech by targeting a string of 2020 Democrats.”Pocahontas, Bernie, Sleepy Joe, Boot Edge Edge,” Trump said, before turning his attention to Mike Bloomberg. “What happened to Mini Mike?”Trump wondered why Bloomberg is “skipping states” and then mocked the billionaire’s height.”I’ve had it up to here,” the president said, his first time targeting Bloomberg at a rally since he entered the race.Trump then turned his attention toward the impeachment trial.”We’re having probably the best years we have ever had in the history of our country, and I just got impeached,” Trump said. “No, that’s not gonna work. Watch. Just watch.”Supporters lined the block for hours waiting to get into the event at Drake University — the president’s second rally of the week after campaigning for newly minted Republican Rep. Jeff Van Drew in Wildwood, New Jersey, on Tuesday night.And though the Iowa Republican Party will still hold its caucuses next week, the president’s visit is geared toward the Trump campaign’s larger, on-the-ground disruption effort ahead of next week’s Democratic caucuses.On top of holding a rally in downtown Des Moines, the campaign plans to deploy over 80 surrogates across Iowa on caucus day, including high-profile Trump cabinet members, such as acting White House Chief of Staff Mick Mulvaney and Secretary of Commerce Wilbur Ross.And while the campaign doesn’t expect either of the president’s Republican challengers, former Massachusetts Gov. Bill Weld or former Rep. Joe Walsh, R-Ill., to make a splash in next week’s Republican Iowa caucuses, the Trump campaign has launched an effort to ensure the president’s supporters show up next week.The Trump campaign on Tuesday posted a series of new Facebook ads targeting Iowans and urging supporters to show up and caucus to “show Democrats that President Trump is going to win big in 2020.”In one ad, Trump rips “Do-Nothing Democrats like Sleepy Joe, Pocahontas and Crazy Bernie” for “proposing policies of RADICAL socialism.””I need your help now more than ever, Iowa,” reads another ad.Trump will campaign next in Manchester, New Hampshire, a day before that state’s primary.Copyright © 2020, ABC Audio. All rights reserved.