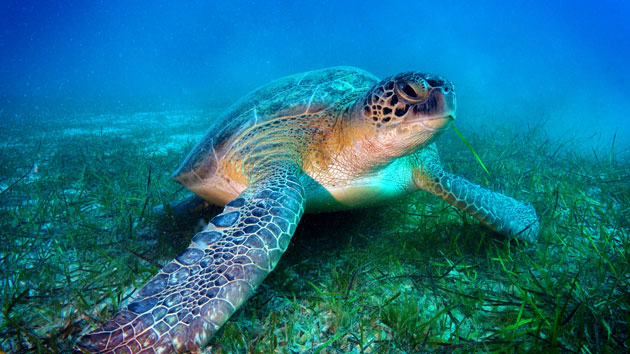 hocus-focus/iStock(CAPE TOWN, South Africa) — A sea turtle from Australia has officially left all other long-distance swimmers in her wake after recording nearly 22,000 miles in two years on her open water journey.”Yoshi has swum an incredible 35,400 km in the two years since her release – that’s an amazing 48 km per day (no rests),” Two Oceans Aquarium announced on Twitter of the loggerhead turtle’s lengthy migration path.The sea turtle’s swim is “definitely a record-setting migration,” the Australia-based aquarium said in a blog post about Yosi’s journey that started off the coast of Cape Town when she was released on Dec. 16, 2017.

With modern satellite tracking technology in collaboration with the government and donors, Two Oceans Aquarium has been able to follow along with Yoshi to map her progress and understand the sights she’s seen along the way.In her swim, which is equivalent to nearly 1.5 million lengths of a 25m Olympic size swimming pool, Yoshi has passed incredible marine protected areas including Ningaloo Marine Park.

Real turtle excitement! Yoshi has swum an incredible 35 400km in the two years since her release – that's an amazing 48km per day (no rests)! ?In human terms, she's swum 1.5 million lengths of a gym swimming pool – and that's only half of her migration path. pic.twitter.com/5tB7tQ52GL

“Ningaloo Marine Park is just off the coast of the Cape Range National Park and is also an UNESCO World Heritage site due to the incredible underwater biodiversity,” according to the aquarium. “It is known as the best place in the world to see whale sharks, has more than 500 species of fish, more than 300 varieties of corals, with manta rays and sea turtles (maybe Yoshi soon) swimming around safely, and even humpback whales visiting in winter.”The aquarium also said that Yoshi moves between distinctive ridges, which means more food.”She is in a lovely warm 27 degree (Celcius), with a very gentle SE current and a southerly wind of about 13km/h,” the aquarium explained. “Great conditions for this very fit turtle!”While it’s impossible to predict her exact route, Yoshi could stick closer to the coastline or head towards Queensland “where there is a smaller nesting population of loggerheads.””She might just end up being the first recorded loggerhead sea turtle to cross three oceans as she continues her world travels,” Two Oceans said.Copyright © 2020, ABC Audio. All rights reserved.