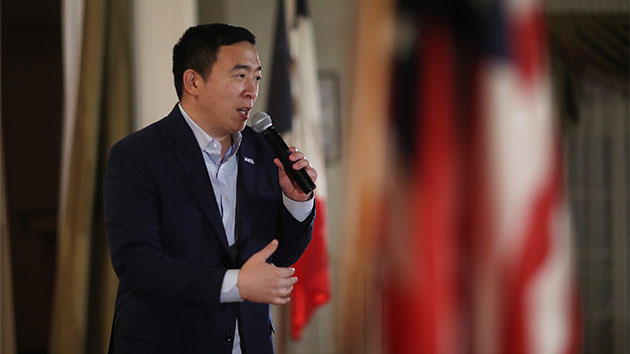 Joe Raedle/Getty Images(NEW YORK ) — Andrew Yang started out as an unlikely candidate who has surpassed sitting senators and governors in the 2020 race for the White House.When asked about his consistently polling at sixth place in Iowa and never hitting double digits, Yang told ABC News Chief Anchor George Stephanopoulos that he thinks his campaign will surprise a lot of people.”I can’t wait to take this vision to the rest of the country starting here in Iowa on Monday night,” he said on ABC’s “This Week” Sunday. “But we’ll be in New Hampshire, Nevada, South Carolina, Super Tuesday. You know that the Yang Gang will be here the entire way.” In order to acquire a delegate out of Iowa, a candidate needs to get 15% of the votes in a given precinct. Stephanopoulos asked Yang about his campaign’s path forward if he’s unable to reach that threshold.”Well first we plan to exceed 15% in the vast majority of locations and so what our supporters might do if we don’t reach that threshold in a particular place, we have a very very diverse group of supporters,” Yang said. “I can’t speak for where they would head. I do have a sense that many of them have supported Bernie in the past, but many of them supported President Trump and they might just leave.”Yang said he has “no plans” to encourage or direct his supporters to back a different candidate if he underperforms in the early voting states.Yang has never held an elected position, yet he generated a strong following that carried him through several Democratic debates. Although he didn’t qualify for January’s debate, he now has the polling requirements to be on the stage for the ABC’s New Hampshire debate.In December, Yang signed on to a letter with then-presidential candidate Sen. Cory Booker to the Democratic National Committee asking Chair Tom Perez to revert the debate qualification requirements to the less stringent ones used in earlier debates. The DNC denied that request, but announced last week that they are eliminating the individual donor threshold to qualify for the primary debate being held in Las Vegas on Feb. 19. It’s a move that some say will open the door for Former New York City mayor Mike Bloomberg to face off against his competitors for the first time in a national debate since he entered the race. “Mike Bloomberg could have gotten himself on the debate stage any time he wanted, pretty straightforward to meet the donor requirement and so I’m not sure that this is a development that he’s going to welcome,” Yang said. “Frankly, I think the DNC looked at this and said we need to get Bloomberg on the debate stage, this change is tailor-made to deliver him to the debate stage. This question is, whether Mike’s excited about it or indifferent to.”While running a campaign that he says addresses the “problems that got Donald Trump elected,” Yang has parted from some of his fellow candidates, such as Sen. Elizabeth Warren, D-Mass., who said that if elected, she’d appoint a task force to investigate Trump. Yang has instead said, he’d consider pardoning him.”Well, you have to see what the facts on the ground are and certainly I’d listen to the guidance of my attorney general,” Yang said. “But if you look, George, at history around the world, it’s a very, very nasty pattern that developing countries have fallen into, where a new president ends up throwing the president before them in jail, and that pattern, unfortunately, makes it very hard for any party to govern sustainably moving forward with the sense of unity among their people.””So, to me, America should try to avoid that pattern if at all possible,” he added.Yang has led an unconventional presidential race, drawing the support of thousands of avid supporters who call themselves the Yang Gang and who have rallied behind him. He has outlasted several longtime politicians despite never having held elected office.His surge, Yang said on Sunday, did not come as a surprise to him. He credits it to his message of how automation has affected the working class and disaffected countless Americans. Yang told Stephanopoulos he expected his message to catch on.”I genuinely did, George, because I know that the American people realize our government has been decades behind in addressing these challenges that are growing stronger and stronger all time,” Yang said. “We’re 25 years behind on technology at a time when technology is transforming our way of life before our eyes. I knew there were millions of Americans just like me who wanted a different approach to solving our problems and leading us forward in the 21st century.”He said he has marveled at a perk of the campaign.”The — my biggest surprise is how much I enjoy a bus with my face on it,” he said. “My — my kids love it too. I feel like I became a cooler dad as a result.”