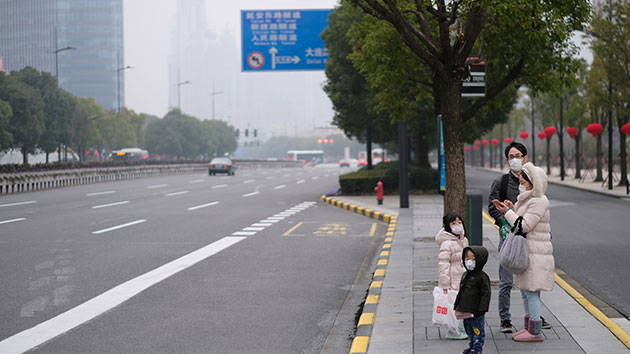 Robert Wei/iStock(RIVERSIDE, Calif.) —  It’s day five for 195 Americans inside the quarantine zone at March Air Reserve Base in Riverside, California. Jarred Evans may be stuck, but he’s hardly taking it easy.”No days off,” says Evans, 27.The professional football player has good reason to stay in shape: after playing quarterback for the Wuhan Berserkers for two years, Evans is due to report to another pro team in Switzerland by Feb. 17.Evans told ABC News he measured the distance around the courtyard at the base hotel where the group is staying so he could calculate how far he needs to run every day.”I run around that multiple times until I reach, three, four miles,” Evans says.Evans says every morning and evening, he and his fellow Americans that evacuated from Wuhan last week head to a special room where medical staff checks them for symptoms of novel coronavirus and takes their temperature.”My temperature has been at a perfect 98.1 [degrees] or 97.9,” he chuckles. “I’m completely fine. I feel healthy. I feel great. I’m just taking my time and waiting to get out of here.”Then it’s breakfast time. The food, he says, is decent.”Today we got eggs, bacon and sausage,” he said.Evans says he’s been told that test results from nasal and bowel swabs taken when the evacuees arrived in California should be known Sunday or Monday, but blood tests may take longer. Regardless of the results, however, everyone will have to stay in quarantine for a full two weeks.”Everyone is very accepting toward what is going on,” Evans tells ABC News. “The CDC and State Department are doing a wonderful job of feeding us, keeping us busy, keeping the kids having fun with their parents. And you can’t go wrong with this beautiful California weather.”A few guards are posted at the gate to the compound keep anyone from leaving, Evans says. On Wednesday night, authorities said one man was stopped when he tried to leave the quarantine area.”I don’t think anyone is going to leave. I think we just had one situation where we had a guy who was like, ‘You all said I don’t have to stay, so I’m leaving,"” Evans said. “I think he just did it the wrong way.” Evans says there are approximately 14 kids in the quarantine group, ranging in age from about 11 months to about 13 years.The shared, forced confinement means that people are beginning to forge new friendships, Evans says.”We’re all getting to know each other,” he said. “There’s so many different types of people from all over America.”Some people have stopped wearing protective gear, but not Evans.”I’m still wearing my mask and gloves, because I want to make sure that I’m 100% clear of any kind of infection,” he said. “But people are really relaxed. I haven’t seen any kind of coughing, any people sick, or looking tired. Everyone is full of joy and energy.”Evans says he speaks to his mother and father three to four times a day. He says he asked authorities to ship two things to the base: his laptop, so he can help his father with the family’s New York car service company, and some weight gain supplements.On Sunday, he says he’s looking forward to a Super Bowl party and barbecue.”They have four 86-inch televisions in the courtyard outside. A couple of us guys have a bet going on,” he laughs.Copyright © 2020, ABC Audio. All rights reserved.