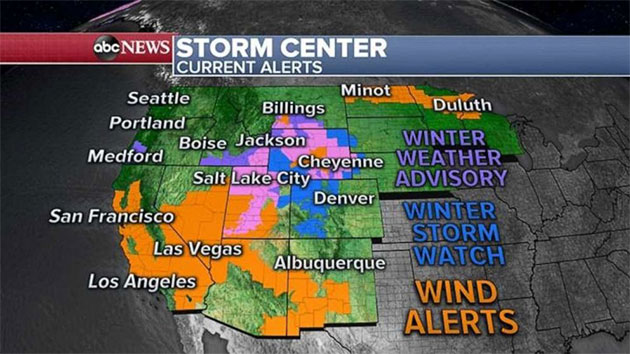 ABC News(NEW YORK) —  A powerful storm brought very heavy and powerful winds to the Northwest on Saturday. Over eight inches of rain was reported in parts of Washington state with widespread reports of wind gusts over 50 MPH with even more significant gusts at the mountain tops.It has been a remarkable start to 2020 in the Northwest United States. Forks, Washington, recorded its wettest January and wettest month on record – totaling 30.78 in for the month. Also in Forks, it rained every day of January for the first time ever. Seattle also tied a record number of wet January days for the city.As a result of so much precipitation, major river flooding is occurring or forecasted to impact some rivers in Washington state, causing flooding in some of the suburbs outside of Seattle. The threat for landslides will persist due to the ground being very saturated. This powerful frontal system is forecasted to track east and part of this system will track across the country this week going to coast to coast.Today the immediate concern is the gusty winds that will be spreading across California and Nevada. Gusts in parts of Central and Northern California could exceed 50 MPH at times today.The strong winds will spread into Southern California and Southern Nevada Sunday night and Monday. Gusts could reach as high as 70 MPH or higher in higher elevations. This could cause downed power lines and downed trees.Additionally, heavy mountain snow will spread into parts of the northern Rockies on Sunday and reach the front range of Colorado on Monday.Then Late Monday and Tuesday a part of this system will track eastward and bring some snow to parts of the Oklahoma and Texas Panhandle. The system will also spread strong storms, including severe weather to the Southern U.S.Severe weather will be possible beginning Tuesday, Wednesday and Thursday across parts of the Southern U.S. from Texas to the Carolinas. Damaging winds, large hail, and tornadoes will all be possible.The result of all of this is locally one to two feet of mountain snow for the Rockies, with locally over three inches of snow in the Denver metro area as well as locally over six inches of snow to parts of Oklahoma and Texas. Meanwhile along the Mississippi River valley, locally two to three inches of rain will be possible. Copyright © 2020, ABC Audio. All rights reserved.