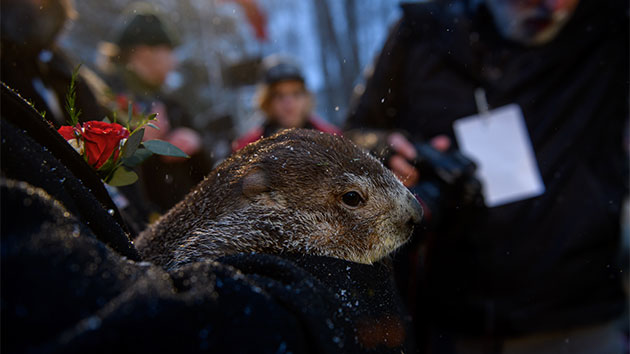 Jeff Swensen/Getty Images(PUNXSUTAWNEY, Pa.) — Punxsutawney Phil, Pennsylvania’s most famous groundhog, awoke this morning and did not see his shadow which means that — according to legend — an early spring is on the way.Every Feb. 2, thousands of people gather in the town of Punxsutawney, Pennsylvania, to see whether or not the famous groundhog sees his shadow or not. Legend has it that if he sees his shadow then winter will continue for another six weeks but if Punxsutawney Phil does not see his shadow spring will come early.Punxsutawney Phil’s top hat-wearing inner circle revealed the prediction at sunrise on Sunday morning.While people gather in the town of Punxsutawney to hear the announcement, Phil’s actual prediction takes place ahead of time in a place called Gobbler’s Knob, a small hill just outside of the town. The formal declaration is made, however, with much pomp and circumstance in the town.2020 marks the 134th time the event has occurred, according to the Pennsylvania Tourism Office. Phil’s predictions have been fairly even over the past five years from 2015 to 2019 with the groundhog predicting a longer winter three times and an early spring twice. Copyright © 2020, ABC Audio. All rights reserved.