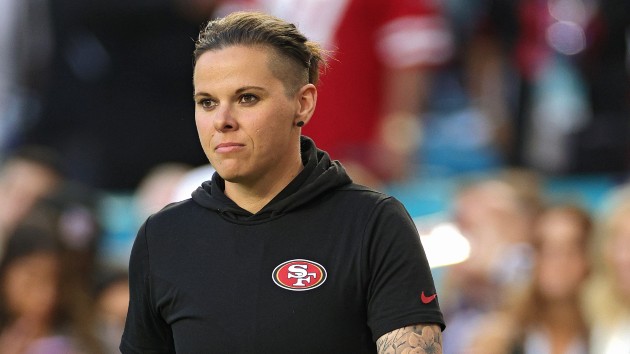 Jamie Squire/Getty Images(MIAMI) — Katie Sowers made Super Bowl history in Sunday’s game between the San Francisco 49ers and the Kansas City Chiefs.The 49ers offensive assistant coach was the first female to coach a team in the Super Bowl. She was also the first openly LGBT coach to reach the Super Bowl, according to the NFL.Sowers has worked nearly her entire life to be in this moment in Miami at Super Bowl LIV.The 33-year-old, who grew up near Kansas City, told ESPN she remembers picking NFL legend Deion Sanders for a book report in elementary school, a stark difference from her other classmates.Sowers started out playing football, spending eight years with the Women’s Football Alliance (WFA) and one year, 2013, on the U.S. Women’s National Football Team, according to her NFL bio.The University of Central Missouri graduate started out her career off the field as the athletic director for the City of Kansas City.Sowers then moved onto the Atlanta Falcons, where she worked with wide receivers during the off-season and spent nine months as a scouting intern.In 2017, Sowers made her way to the 49ers, first as a fellow working with the team’s wide receivers and then as a seasonal offensive assistant. She is in her second season as an offensive assistant with the 49ers.”She has more knowledge than what people expect from a game standpoint, for sure,” 49ers player Richie James told NFL.com. “She works hard at her craft, just as much as [the players] do. She loves it, she loves the game as much as we do.””You gotta respect it … and she’s really funny, to be honest with you,” he said. “And she can relate to us more than you’d think.”Sowers was seen in this year’s Super Bowl not only on the sidelines but in a commercial as well. Her story of perseverance and breaking barriers was told in a Microsoft ad.”I always wanted to be a coach,” Sowers says in the commercial. “I never saw an opportunity in football because I’d never seen a female coach before.””All it takes is one and then it opens the door for so many,” she says at the commercial’s end, as the words “Thanks Katie for being the one” appear on the screen.

Sowers is only the second female to earn a full-time job as a coach in the NFL. Her trailblazing efforts have not gone unnoticed on social media, where parents and other female trailblazers have shared their appreciation.Reflecting on her achievement, Sowers shared the same message in nearly all of her interviews in the past week leading up to the Super Bowl.”Being the first female in the Super Bowl, it’s surreal,” Sowers said, according to ESPN. “It really is. But what I want to continue to say is that even though I’m the first, the most important thing is I’m not the last and we continue to grow it.” Copyright © 2020, ABC Audio. All rights reserved.