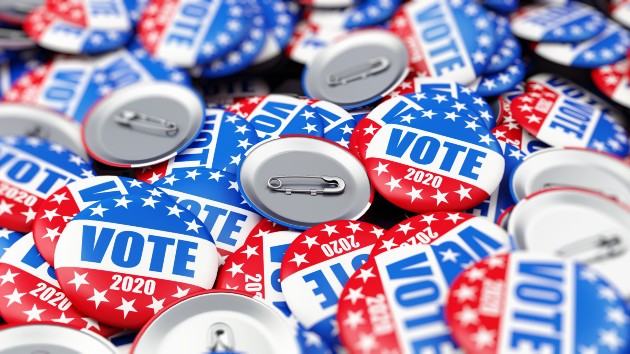 3dfoto/iStock(DES MOINES, Iowa) — Iowa voters will gather in more than 1,600 neighborhood meetings Monday to argue, discuss and elect the delegates who will go on to vote for candidates at the national party convention in the summer. The Iowa caucuses officially kick off the 2020 primary election.The outcome is still anyone’s game. Four candidates — Joe Biden, Pete Buttigieg, Bernie Sanders and Elizabeth Warren — are neck-and-neck.Some campaigns need the jolt out of Iowa more than others. Sanders, Biden and Warren both hold key pockets of support across the nation that will probably sustain them well into the spring. A win for either in Iowa could consolidate both candidates’ supporters into support for one, leading to that candidate’s likely nomination.Buttigieg and Sen. Amy Klobuchar have faced other challenges. Voters worry whether they have national teams and cross-country appeal. For example, some voters who say they are considering Buttigieg, openly fret about his lackluster numbers with African Americans in the rest of the country.If Buttigieg or Klobuchar were to surprise pollsters in Iowa, it would showcase them as viable alternatives and up their chances as the Democratic presidential nominee, practically overnight.

Why the Iowa caucuses matterAfter 13 months of campaigning, seven debates, 2,339 events in Iowa alone, four turkey legs consumed by Andrew Yang and thousands of Elizabeth Warren selfies, the process now starts to move fast.The New Hampshire primary is just over a week away.Super Tuesday is exactly a month from Monday.By the middle of March, 60% of the delegates up for grabs will be allocated. So the speed at which a campaign gets launched out of Iowa can dramatically determine whether they can keep up.Not since President Bill Clinton has a candidate lost Iowa and New Hampshire and gone on to win the nomination. And very different from this cycle, Clinton did not compete in Iowa as those caucuses in 1992 were uncontested, because the local, beloved U.S. Sen. Tom Harkin was on the ballot.Breaking it down by ageBernie draws voters under 40 and Biden skews older: According to the most recent national ABC News/Washington Post poll, Biden is leading among Democratic-leaning voters older than 50, with 38%, compared to Sanders, who has 12% support in that age bracket.The numbers almost exactly flip with younger voters: 39% of voters under age 40 chose Sanders, while only 18% of voters under 40 chose Biden.Several polls looking at more specific age brackets showed an even sharper divide. For example, a Quinnipiac poll this week of Democratic-leaning voters showed that Biden had only 3% support with folks under 34, while Sanders registered at 53% in that age group. Among voters 65 years and older, Sanders was at 7%.This data tracks with what we see on ground at the candidates’ events. In the final sprint to caucus day, Sanders has been holding rock concerts with A-list celebrities, whereas Biden events have been largely in the afternoon with more mellow, older crowds. The Sanders team has acknowledged how problematic this age disparity among supporters is for his team and has agreed that reaching out and appealing to older voters is a must for them.Younger voters have historically been a core component of any winning coalitionHistorically, older voters are significantly more reliable, especially in general elections. Still Democrats have long relied on younger voters as a core component of any winning coalition. The fact that college students and younger voters had a lethargic interest in Hillary Clinton hurt her in urban centers in key states in 2016.Looking at Iowa polls specifically, ABC News’ colleagues at FiveThirtyEight have calculated that Biden’s support is almost evenly split between men and women, whereas Sanders has more support from men. Sen. Warren’s support is made of up of slightly more women instead.Is the future female?In the last few weeks, one of Warren’s most salient arguments has been that women win elections.In Des Moines, Iowa, last Friday, Congresswoman Katie Porter, who was a student of Warren’s and then went on to flip a California seat from red to blue, gave a moving speech about how she was inspired and supported by Warren.Biden and Sanders both do significantly better than the rest of the pack than voters without college degrees. Sanders’ team has also focused significantly on bringing new and infrequent voters into the process, something even the Iowa State Party Chair has praised him for.In the last few days it’s hard to know to trust your eyes or the polls. Buttigieg’s numbers have taken a hit, but his crowds are still there and excited. Recently, Buttigieg started name-checking Biden and Sanders and saying out loud to voters his belief that Democrats need a primary race this year that looks nothing like the last election cycle. It is a strong argument, but did he make it too late to flip the script now? Copyright © 2020, ABC Audio. All rights reserved.