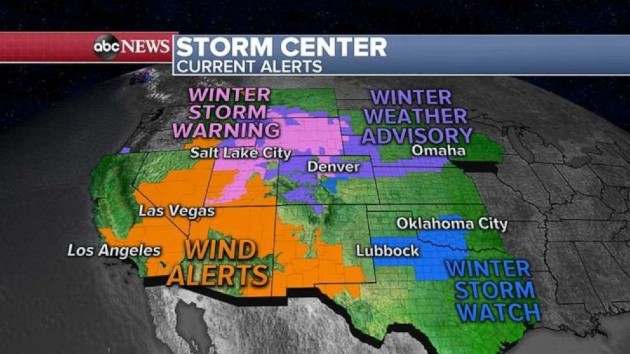 ABC News(NEW YORK) — Up to 15 inches of rain fell in parts of western Washington in the last seven days pushing rivers over their banks and producing significant flooding. Homes, roads and streets have been submerged and some people even had to be rescued over the weekend.The latest storm has moved out of the Pacific Northwest and is moving through the Rockies with heavy snow, strong winds and crashing temperatures. Ahead of the storm, 16 states from California to Iowa are under snow, ice and wind alerts.On Monday morning, the complex storm system is moving over the Rockies and a Winter Storm Warning has been posted for Salt Lake City where more than a foot of snow is forecast. A Winter Weather Advisory has also been issued for Denver where 3 to 7 inches of snow is forecast Monday with up to 2 feet in the mountains just west of the city. By Tuesday, a storm system moves into the central U.S. with severe storms expected in the South, including damaging winds and even a few tornadoes. To the north, snow will fall from Colorado to Iowa, with several inches expected there.By Wednesday, the storm system will stretch from the Plains into the Gulf Coast with damaging winds and a threat for tornadoes in the Gulf Coast and heavy snow possible from western Texas into Oklahoma and into parts of Missouri. By Thursday, the strongest part of the storm system will reach the East Coast with thunderstorms that could produce damaging winds in the Carolinas and Florida and heavy rain and some snow and ice in the Northeast for what could be a messy end to the week.Copyright © 2020, ABC Audio. All rights reserved.

Washington Monument closed after being vandalized with obscenities, red paint

Author speaks out as his book becomes one of the most banned in the U.S.