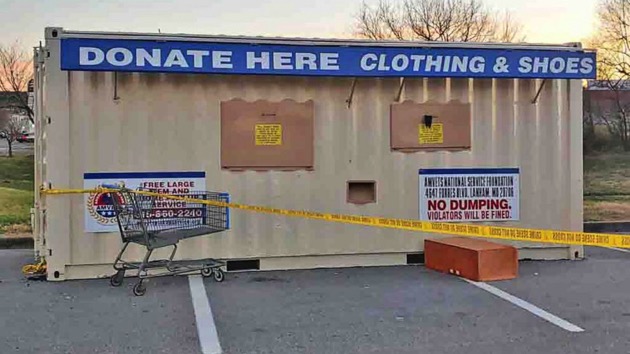 Clarksville Police Dept.(CLARKSVILLE, Tenn.) — A man has died after getting stuck in a donation bin outside a Tennessee Walmart, according to police.Authorities were notified on Sunday about the victim who appeared trapped in the clothing and shoe donation bin, Clarksville police said.Emergency crews responded to find the lower part of the man’s body protruding from the donation bin, said Clarksville police spokesman Jim Knoll.The 48-year-old was extricated from the bin and pronounced dead at the scene, Knoll said.No foul play was involved, Knoll said.Knoll declined to tell ABC News how long the man was in the donation bin or his cause of death, citing the ongoing investigation. Copyright © 2020, ABC Audio. All rights reserved.